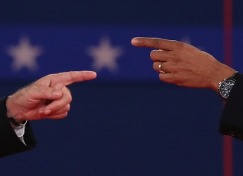 Most people associate this time of the year with football and the return of their favorite television shows. Not me. Instead, I have had my eyes glued to the television to watch the latest updates on the presidential campaign trail. Part of me enjoys some of the absurdity and showmanship inevitably associated with campaigns, and part of me is aghast at the lack of decorum. In politics, it’s often difficult to find moments of civil discourse, but it is absolutely necessary for pragmatic policy-making.

CCMU is a non-partisan organization, out of necessity as a nonprofit, but more importantly because we adamantly believe that positive change happens when people meet in the middle. Both in our state and nationally, we have difficult health policy topics that we need to tackle. We need to address immigration. We need to confront health care costs and unnecessary spending. We need to deal with racism and the violence that stems from it. We need to make health care more affordable, accessible, and available. It’s imperative that our leaders be willing and able to disagree respectfully while still working together to identify and pursue solutions.

Civil discourse is engagement in conversation intended to enhance understanding. Taking the time to listen and learn from one another, we can seek to appreciate where another person is coming from and why they hold the beliefs they do. Exchanging ideas, opinions, and perspectives gives us a big picture view so we can find middle ground. It doesn’t mean we will all agree all the time, or even often—it just means we will seek to listen and better understand.

In Colorado, no process better exemplifies this than the development of the state budget. This is a process that does not get enough attention or credit, but it is a great example of how meeting in the middle is possible, especially with something as important in how our state programs and infrastructure are financed. Every year, the bipartisan Joint Budget Committee (JBC) comes together to create a budget, which is no easy task given that Colorado has many financial obligations and constraints. Instead of defending their party priorities with hostility and refusing to compromise, JBC members seek a path forward through civil dialogue and pragmatism. This process will begin soon, with departments submitting their budgets to the JBC in November, and the final budget being released and voted on in March or April.

Too often, we surround ourselves with those who we agree with, stop listening when someone shares an opinion that doesn’t align with our perspective, and shut off avenues from which to hear different voices and ideas. This self-segregation increases polarization. So, I invite you to be open to new conversations and collaborations. Instead of dismissing or defending against opposing viewpoints, seek common ground—and encourage your elected leaders to do the same. Diplomacy and civility may not be flashy enough to get the headlines, but they’re how the real work gets done.