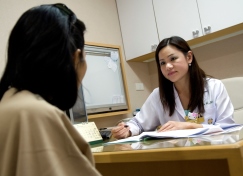 When I first moved to Denver, I worked in affordable housing, and spent time at my organization’s various properties around the metro area. The largest of these was in the East Colfax neighborhood of Aurora, which housed over 300 families, nearly all of which were immigrants and refugees.

I remember visiting on a day that free health screenings were being offered for residents, and watching as a ten-year-old Thai boy was asked to explain to his mother, who spoke no English, that she had high blood pressure and several cavities. The futility of the situation was abundantly clear to all of us. The child knew he wasn’t going to be able to explain what the screener was telling him and the mother knew it didn’t matter because she didn’t have the resources or ability to access health care services anyway. The screener knew his inability to communicate directly with the woman wasn’t fair to her or her child and that his suggestion that she seek further care was useless unless it was paired with solutions to the barriers she faced. So, the woman graciously nodded as if she understood and would follow through, and the screener thanked her for coming by.

I’ve thought about that day often in the past year. CCMU has recently prioritized immigrant health issues, and we’ve been researching opportunities to increase access to care and coverage for immigrants in Colorado. The data we’ve gathered has given us an even deeper appreciation for the importance of this work; a full 10% of our population, or over half a million Coloradans, are immigrants. These Coloradans are also an important part of our economy: immigrants paid $3.5 billion in taxes in Colorado in 2010, with immigrants without documentation status contributing approximately $1.3 billion of that. Immigrants also increased our state’s economic output by $21.6 billion and generated $43.8 billion in goods and services.

Insurance can be difficult to come by for many immigrants, as those who participated in our recent immigrant focus groups explained. We heard a lot about their desire to purchase coverage (as opposed to rely on Medicaid, CHP+, or the emergency department), but that affordability and documentation status were significant barriers. There are waiting periods for Medicaid for some immigrant populations; others may be allowed to reside and work here but lack the documentation status that would allow them to purchase insurance through Colorado’s state marketplace. Even when insured, access to health care services for immigrants can be limited by language barriers, lack of transportation, and poverty, among other factors. Colorado’s safety net is doing a commendable job of caring for our immigrant populations, even while stretched thin, but it’s not enough to fill the need. Without access to coverage and care, good health may be out of reach for these families.

Given the current political climate, the physical and mental health of our immigrant communities are at great risk. For Colorado to achieve its best health, we’ll need to find creative ways to connect immigrant populations to quality, affordable health coverage and care so they can achieve their best health. That’s why we’re committed to building leadership of immigrants themselves, as we need their voices and ideas in this work. The path ahead may be difficult, but the situation is only futile as long as we allow it to be.