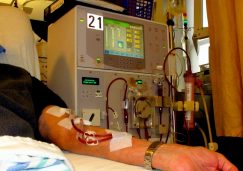 I turned 26 last month, which means I am no longer eligible to stay on my parents’ health insurance plan. I’ve had a few health-related incidents over the past few years, so having health insurance through my parents of my employer has been important. Unfortunately, being insured is a privilege many others are not been afforded.

In particular, I am thinking of immigrants without documentation who are living with end-stage renal disease (ESRD). ESRD is the final stage of chronic kidney disease and requires ongoing kidney dialysis, without which a person would die in a matter of days. For the majority of 650,000 American adults living with ESRD, the disease is manageable and treated with dialysis three times per week and covered by private health insurance, Medicaid, or Medicare. But, for the estimated 6,500 immigrants without documentation living with ESRD (nationally), being uninsured can be a death sentence.

Until recently in Colorado, these patients were only able to receive dialysis as an emergency action to save their lives. About every seven days, they were forced to wait until they were on the brink of death to receive care in an emergency room, under the Emergency Medical Treatment and Labor Act, which compels hospitals to care for anyone whose life is in imminent danger. Making these encounters even more harrowing is that if these folks showed up to the hospital too early, they may be turned away because their lives are not in immediate jeopardy, and if they waited too long, they might need to be revived from cardiac arrest.

Dr. Lilia Cervantes, an advocate, chronic kidney disease researcher, and Denver Health physician, has been at the forefront of this issue for the better part of a decade. Her extensive research has shown that patients who had emergency-only dialysis were 14-times more likely to die than those who received standard dialysis. Furthermore, immigrants without documentation living with ESRD suffer from “death anxiety” from weekly near-death experiences. Additional studies have found that being unable to treat kidney patients until they were near death has also caused extreme distress for both physicians and caregivers.

Center for Health Progress teamed up with Dr. Cervantes and several other partners in 2017 to change Colorado’s Medicaid policy, allowing the emergency Medicaid program to cover standard outpatient dialysis up to three times a week. We brought stakeholders together, researched policies in other states, and worked with partners to gather stories from community members who had been directly impacted by the issue. The campaign faced several hurdles along the way, but on February 1, 2019, the Colorado Department of Health Care Policy and Financing officially named ESRD an emergency medical condition, thereby allowing immigrants without documentation with ESRD to access dialysis services at outpatient clinics.

Now, a year after the policy change, we can clearly see its effect.
According to the Department of Health Care Policy & Financing, the 90 or so patients this policy directly affects have nearly all been moved from emergency to standard dialysis care, extending their life expectancy dramatically. Also, since the state was previously paying around $20,000 per patient per month for emergency dialysis, and standard dialysis is much cheaper, Colorado is now saving $1.6 million per month.

This was a big win, and an important reminder of why policy advocacy matters. This work can often be slow, messy, and frustrating, but making the system work better for those who need it most can have enormous benefits for us all. That’s why Center for Health Progress continues to fight for laws and policies that make it possible for everyone to care for themselves and their families—join us!