You are here: Home / Learn More / Blog / Climbing to Kids’ Coverage through CHIP 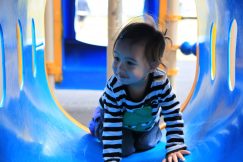 Over my birthday weekend last month, my husband and I decided to summit the highest peak in Colorado–Mount Elbert at 14,400 feet. Even though we were physically prepared from our many long-distance and challenging hikes, the altitude was seriously slowing us down as we were getting closer to the top. At the last 500 feet of the climb, with the end goal in our sights, we found ourselves tempted to give up and turn back. We ultimately kept pushing, though, because we couldn’t be satisfied with good enough—we had to reach our goal.

Similarly, we are so close to achieving 100% of all Colorado children being covered by health insurance. According to the Colorado Health Access Survey, we reached the 97% mark in 2015. We have been working alongside our partners in the All Kids Covered Coalition over the last 10 years to create and improve kids' health coverage options, especially through Children’s Health Insurance Program (CHIP or CHP+ as it is known in Colorado), and now, we’ve only got the last 500 feet left to climb.

CHIP, which celebrated its 20th anniversary this year, is a critical program that covers 8.9 million pregnant women and children nationally, and 90,000 in Colorado. CHIP is a successful health coverage program, especially in addressing coverage inequities among different racial groups, and is one that enjoys overwhelming bipartisan support. However, this program is at risk of ending if Congress does not act swiftly. As it stands right now, while the CHIP program is slated to continue, the federal financial supports that states receive ends on September 30 (yes that is only three weeks away!). Our best case scenario is that Congress quickly authorizes a financing mechanism to keep states at current levels of funding for the next five years, at the very least. All Kids Covered is working hard to advocate with our Congressional delegation to take leadership on this issue so Colorado won’t be forced to end coverage for these children and pregnant women.

In this increasingly fractious political moment, especially when it comes to health care, it is hard to imagine that Congress can take swift, yet important action to ensure that this popular bipartisan health insurance program has the funding it needs to continue. We feel the urgency, as we’re so close to achieving the goal of health insurance for all Colorado kids. Despite Colorado’s many efforts, disparities still exist, and it’s important that we support commonsense legislation that gets us closer to health equity, not further away from it. This one small step will ensure that we can keep moving forward.

At Center for Health Progress, we believe our health care system should work for all Coloradans. When we start kids off on the right foot by providing necessary health coverage, we are taking important steps toward that goal. We’re so close to covering all Colorado kids, and “good enough” isn’t acceptable when it comes to their future—or ours.

Maintaining Coverage Gains in the Face of Uncertainty