You are here: Home / Learn More / Blog / The Coalition for Immigrant Health’s 2021 Priorities 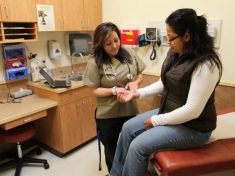 This post was written by Erika Serrano, a former member of our team.

I remember having to translate for my mother at the doctor. I didn’t know the technical medical vocabulary in Spanish, but there wasn’t an interpreter available. I’ve also lived through people in my family being separated from their loved ones because of our broken immigration system, and have seen the long term health effects it caused in our lives. Ask me how immigration status affects health--I’ve got firsthand experience.

That’s why the Coalition for Immigrant Health is so important. Center for Health Progress formed the Coalition in 2016 to secure the safety and well-being of immigrants and their families across Colorado. This growing group of people and organizations is working together toward universal access to health care by centering the needs and perspectives of immigrants--people like me and my family. Members of the Coalition for Immigrant Health vote on the strategic priorities for our collective work and support legislation and endorse policies that promote health and justice. For this upcoming 2021 Legislative Session, the Coalition decided to focus on two very important bill proposals, led by two of our member organizations: the creation of a legal defense fund, which is being led by the Colorado Immigrant Rights Coalition, and the repeal of two anti-immigrant laws that require government employees to discriminate against immigrants, which is being led by the Colorado Statewide Parent Coalition.

Immigration court is the ONLY legal proceeding in the US where someone can be detained without the right to a government-funded attorney if they cannot afford one. This is critically important, because immigrants with legal representation are 10.5 times more likely to succeed in their legal cases than immigrants without legal representation. Also, being detained without representation means longer times in a detention center. Immigration detention is damaging for physical and mental health in non-COVID times and life-threatening during a global pandemic. There have already been at least 124 cases of COVID-19 in the Aurora GEO detention center, and that’s just what’s been reported by ICE. In addition to the physical risk for people detained, this also has dramatic impacts on family stability during this economic downturn, as two parent households become single parent homes. Ensuring everyone has legal representation for their legal cases would go a long way to ensuring families can stay together and communities can thrive.

The Coalition for Immigrant Health’s other priority for 2021 is repealing anti-immigrant laws. House Bills 06S-1009 and 06S-1023 need to be repealed because they are discriminatory and in conflict with many state and local declarations of inclusivity. HB06S-1009 requires verification of lawful presence for state and local public benefits, including all professional and commercial licenses. This law is keeping immigrants from getting the childcare, nursing, and other licenses they’ve earned and also keeping skilled workers we desperately need out of the workforce. HB06S-1023 requires state and local government agencies to verify the lawful presence of applicants for public benefits. These requirements are being misapplied to keep immigrants from accessing benefits they’re eligible for--like library cards and school lunches. These harmful laws must go.

Maybe you--like me--have directly experienced challenges with our immigration system or the way our systems and institutions treat immigrants, and how those experiences have impacted your health. Or maybe you know someone who has. Or you don’t know anyone directly affected personally, but you want to get involved nonetheless. The Coalition for Immigrant Health wants you to join us! We need your voice at the table and your action to drive important policy change. You matter in this movement. Together in unity we are powerful and strong!

DACA Is Only the Beginning