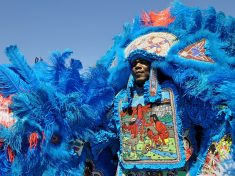 Usually when I go home to New Orleans, I shy away from touristy activities, since I prioritize visiting family members I don’t get to see that often, and I’ve seen it all – or so I thought. On my last visit, I found myself at the Backstreet Cultural Museum, which is preserving the history and culture of black New Orleans, especially second-line funerals and the Mardi Gras Indians.

The history of Mardi Gras Indians is fascinating. In the 1700s, enslaved people who escaped were taken in and protected by the indigenous people in the area, which began the merging of black and Native culture. This honoring of Native solidarity and sacrifice is on display annually as Mardi Gras Indians don elaborately handmade costumes that weigh over hundreds of pounds. Similarly, in Florida, the Black Seminole Nation arose from a partnership between Seminoles and previously-enslaved-but-since-freed Africans. These are just two examples of how black and Native communities have lived and worked together since our country’s earliest days (although to be clear, not all Native-black relations were harmonious; some Native tribes participated in slavery practices, for example, but that's a blog post for another time).

Throughout history, in the face of and in spite of the white community’s disinvestment and oppression, communities of color have banded together to become stronger and more resilient, often building their own infrastructure, institutions, and social protections. The New Orleans area holds many other Mardi Gras associations (also called krewes) and social aid clubs who banded together to provide health care and burial services for fellow community members. Similarly, across the country, we’ve seen other movements, such as the Black Panther party and the United Farmworkers Movement, work to provide services to their communities in addition to their political organizing and activism. These communities also have had a long history of making investments in their own in order to sustain these networks and supports.

These stories of strength, power, self-sufficiency and ingenuity rarely make it into our US history books. Instead, the more common narrative about communities of color focuses on deficit, poverty, struggle, and need. I’ve been guilty of this kind of thinking, and so has Center for Health Progress, despite our best intentions. Even something as well-meaning as saying we “empower” communities to drive change indicates that we think communities don’t currently have power, and it’s up to us to give it to them. However, communities do have power. In fact, our whole approach as an organization is founded on the ardent belief that individuals know best what they need from the health care system, and can come together to demand the political and social change required to get it. They don’t need us to empower them—they need us to help make space for them to leverage that power.

One of my New Year resolutions this year is tell more stories about community power and resilience, which would transform our conversations about policy change and social supports. I hope you’ll join me! And, the next time you’re in New Orleans, be sure to support the Backstreet Cultural Museum and other institutions (my favorite: the Dew Drop Jazz & Social Hall in Mandeville), so we can keep these amazing parts of New Orleans culture alive!

The Art of Collaboration

The Rise of Collaboration