You are here: Home / Learn More / Blog / Compromise at the Capitol 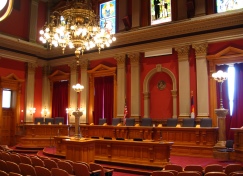 Someone once told me, “You know you’ve reached a good compromise when neither side is happy.” I disagree; compromise is the end result of time and effort being put in by both sides to find a way to see eye-to-eye when you initially may not. Sometimes, each side moves a little bit closer to the middle where agreement is; and other times, it may take someone being willing to change their mind. As I reflect on the 2016 legislative session, I realized the reason why we accomplished what we did this year was the result of many, many tough conversations and compromises.

Without question, this year’s budget situation was the biggest predicament that legislators had to tackle. With Colorado’s economy doing relatively well, revenues were close to our constitutional limits and our stringent tax code, which meant we had limited flexibility to spend those dollars. At the start of the session, legislators thought they would be forced to cut payments to Medicaid providers, which for the last several years were at parity with Medicare. Through compromise and adding new funding sources, we were able to pass HB 1408, which utilized unused funds from tobacco taxes to make up the shortfall.

Another bill that was a successful byproduct of many long, difficult conversations is a CCMU priority bill, SB 69, which gives recognition and oversight to community paramedics and related programs that serve the underserved. CCMU began this work in the summer of 2014, participated in many long meetings over the course of 2015 with CDPHE’s task force, and then in many open stakeholder meetings once the bill was released. It was tough to get everyone on the same page; however, we finally were able to pass a bill that achieves our shared outcomes and vision for this innovation in health care.

Sometimes, though, despite your best efforts, the compromise doesn’t materialize. The other big win this session could have been the hospital provider fee (HB 1420), which is very much tied to the sustainability of rural hospitals and our Medicaid program. By converting the hospital provider fee into a state-owned enterprise and exempting it from our constitutional limitations, we could have provided some budget flexibility for the next few years and protected the important program. There were many tough conversations around the issue, but it looks like it is going to require at least one additional session to find middle ground.

Compromise on difficult issues is taxing, but it’s worth it when it results in good public policy. Health care and our other publicly-funded priorities are in need of more thoughtful dialogue and collaborative solutions. I hope we can continue to see effective negotiation as we do the hard work of implementing these bills and preparing for the 2017 legislative session!

Read more about the 2016 session in our annual Moving Public Policy Forward report!