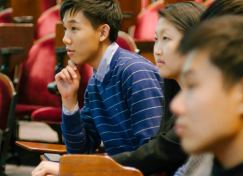 As a child, I was obsessed with words, so naturally, I lived for the annual spelling bee. After school every day, I would pore over my Random House Dictionary of the English Language (second edition, unabridged, with a world map at the end) and my spelling bee practice books. My dedication paid off; I took home a first place trophy in third grade. There’s no denying it: I fit the model minority stereotype—or the notion that all Asians are academically-gifted high achievers and hard workers—to a tee.

This is a dangerous stereotype, though, and one that disregards the diversity of the Asian population. It’s also becoming more and more outdated, especially with the burgeoning population of Asians who come to America escaping politically unstable countries, only to find that their new reality conflicts with the one perpetuated by a lingering myth. The problem is the data: it’s very deceiving.

Colorado is home to around 185,000 descendants of and immigrants from 30 Asian and 25 Pacific Island nations, making the Asian American and Pacific Islander (AAPI) population the most diverse in the state. Viewing the Asian population as a whole (PDF), it appears that they are better off than any other racial or ethnic group: the high school graduation rate for Asian Coloradans is 85% compared to 77% for all Coloradans, the median household income of Asian Coloradans is nearly $14,000 more than the state median, and 11% of Asian Coloradans live in poverty compared to 13% of all Coloradans. Moreover, Asians appear to enjoy optimal health, outperforming other populations on everything from maternal child health to risky behaviors to life expectancy.

Again, though, the problem is the data. The experiences of the Japanese generally differ from those of Hmong individuals, which are different than those of Indians—yet, they are all lumped together to make up the Asian dataset. For example, in the US, 6% of all Asians report frequent mental distress, compared to 11% of all Americans; however, 21% of Bhutanese refugees in America suffer from depression, and their suicide rate is nearly twice the national rate. While overall, the percentage of uninsured Asian Americans was slightly below the national average of 16% in 2012, 20% of Vietnamese Americans and 25% of Korean Americans were uninsured. Another example: a California survey (PDF) revealed that while 19% of the state’s residents visited the ER in the past year, 13% of their Asians and 34% of their Pacific Islanders did. Disaggregating the data is the only way to reveal these differences between the various Asian populations.

To understand the true mosaic of what it means to be Asian (or a member of any racial or ethnic group, really), we need more granular, Colorado-specific data. Without it, we won’t recognize areas of great need within a diverse population. Nationally, the Centers for Disease Control and Prevention are beginning to document important trends, and locally, organizations like the Asian Pacific Development Center are working to ensure that patients receive integrated and culturally-appropriate care. That being said, there is much more work to be done.

These days, my experience as an Asian in the US no longer seems like the norm. Every day, low-income Asians in Colorado experience problems finding affordable housing, steady incomes, and easily accessible health care—just like other low-income Coloradans of color. With the lack of disaggregated data limiting our understanding of the health disparities facing Asian populations, though, it’s hard to know where to start to address them. I suggest we start with rethinking our dataset.