You are here: Home / Learn More / Blog / Discord Under the Gold Dome 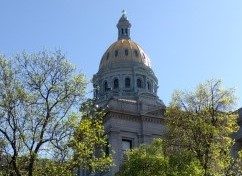 I’ve always appreciated that even when the issues are complex and partisan, Colorado’s legislative session has felt largely cooperative. At the peak of divisiveness, despite the battles, some public disagreements, and narrow vote margins, common ground and collaboration was a common goal. But it didn’t feel that way this year to me.

Borrowing from the energy and priorities in D.C., health care and immigrant issues rose to the top as the most common themes in the 2017 legislative session. It seemed like anytime these issues were raised, there was some level of controversy or rancor, which made it more challenging to advance commonsense solutions. Instead, we saw more “statement” bills, which—instead of being practical policy—are a less-than-productive way of sharing an opinion. For example, we opposed SB 281 and HB 1134, which would have built fear and mistrust in two of our critical institutions, law enforcement and health care, by promoting false narratives about immigrants.

Despite the contentious environment, we remain committed to creating a more equitable and accessible health care system. We were active in the I Drive Campaign, and were disappointed to see HB 1206 fail in the Senate. This bill would have improved upon an already existing program that allows immigrants without documentation in Colorado to get driver’s licenses, by streamlining the renewal and application process. It’s important for all Coloradans to be able to access basic necessities to keep themselves and their family members healthy, and a driver’s license is an important part of that. Along with SB 281 and HB 1134, which fortunately also failed, these bills were surrounded by divisive dialogue around the role of immigrants in our state.

Additionally, we were active in a couple of important issues specific to health care, such as HB 1353, which codifies the Accountable Care Collaborative into statute and increases transparency by requiring regular reports to the legislature on performance-based payments. Also, we were supportive of HB 1115, which was signed into law early in the session, clarifying that Direct Primary Care is not insurance and offering clear consumer protections for patients interested in entering into an innovative care system with their primary care provider. We think this sets us up well for better understanding of how new payment systems result in improved quality of care and health outcomes. Although other commonsense legislation faced great opposition this session, we are pleased to see these two important bills become law.

Last but not least, the seemingly never-ending conversation about protecting the hospital provider fee in order to avoid budgetary cuts to hospitals on the brink of closures finally culminated in the bipartisan passage of SB 267. While we are glad to see this bill pass after many compromises, we anticipate continued conversations about the implications of increasing Medicaid copayments as well as decreasing budget supports to other important state programs.

As we begin preparations for the 2018 legislative session, we will be especially focused on addressing long-standing inequities in health care for Coloradans. These are complex challenges, but the ones that will make the biggest and most long-term impact on the lives of our families and neighbors. And, I think we’ll all be hoping that next session is a little friendlier!