You are here: Home / Learn More / Blog / Driving Away Barriers to Health Access 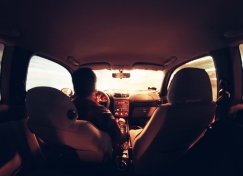 The days leading up to my 16th birthday, I was overwhelmed with anticipation as I prepared to visit the DMV to take my road test and get my driver’s license. Once I had earned that license, I celebrated a newfound sense of independence. I no longer had to rely on friends or my parents for a ride, or had to feel the sense of disappointment if I had to decline an invitation because I had no way of getting myself there. Even getting myself to school without my mom’s help seemed like a huge victory!

As I’ve gotten older, that small amount of freedom that felt thrilling at 16 has grown to feel much more routine and more like a necessity. My driver’s license gives me the ability to live a healthy life – it means I can get myself to and from work, the grocery store, and the medical clinic when I need my regular check-ups. In all the years that I’ve had my license, I’ve begun to take it for granted—it means I don’t worry about having to rely on public transportation to carry home my heavy groceries or choose where to live based on its proximity to a light rail or bus stop.

However, those are exactly the sorts of concerns that are a reality for many Coloradans who work and live in our state, just because they are immigrants without documentation. In 2013, the Colorado state legislature joined several other states in deciding to allow immigrants without documentation who reside in Colorado to apply for driver’s licenses. The fees paid for these licenses fund the program, which means it has little to no impact on the state budget. Unfortunately, due to several changes over the last couple of years, there will soon be only one DMV office in the whole state that can offer appointments for immigrants to apply for driver’s licenses. Additionally, the program has other restrictions with the unintended consequence of many immigrants who have licenses today facing challenges in renewing their licenses. CCMU is pleased to support the I Drive Colorado Campaign and its efforts to address issues with the program in 2017, including the recently introduced House Bill 1206. CCMU joined nearly 20 other health organizations to describe the public health impact of the program and the fixes that need to be made to it.

CCMU is supportive of this campaign’s work and of this legislation because we see the intricate connection between a driver’s license and a person’s access to health care and opportunity to live a healthy life. If a parent needs to safely transport their sick child to the doctor, something as simple as a driver’s license shouldn’t stand in the way. That same family shouldn’t also face poorer health outcomes due to limited choices of where they get food or where their families recreate.

Getting a driver’s license isn’t just a dream for most 16-year-olds, but also for many hard-working Colorado individuals and families who happen to be immigrants without documentation. All Coloradans should be able to legally and safely transport themselves and their families to where they need to go.

Health Coverage as a Tool for Health Equity