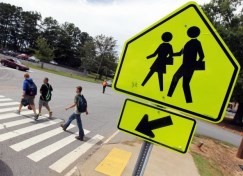 This post was written by Gretchen Hammer, a former member of our team.

I have long been fascinated by the debate about school start times. It is a bit ironic, really, because as an early riser, I do my best thinking and produce my best work between 5:00 am and 10:00 am, so starting high school just as the sun was rising in the winter was never really a problem for me.

My fascination in the debate is not personal, though. It is about watching how large systems, like school districts, respond to the needs of the people they are designed to serve: students, especially when those needs are supported by overwhelming scientific evidence.

Let’s start with the facts. A recent three-year (PDF) study concluded that high school students who started school later (after 8:30 am) got more sleep, and that teens that did not get enough sleep had higher depression symptoms, consumed more caffeine, and were at risk for bad decisions regarding substance use. Teens at schools with later start times had better academic performance on a variety of measures, better attendance, and fewer car accidents.

In the face of this and other overwhelming evidence, it would seem that starting high schools later would bring significant benefit to teens and would be a priority for districts trying to keep high school students healthy and academically successful. As you may suspect though, making changes in a major system like a school district is complicated. There are bus schedules, implications for after school programs, the competing priorities of others in the system, and the expense of implementing the change to consider.

However, that leaves us with a system that is unable to make changes to meet the evidence-based needs of their students. To an outsider, that inability to change appears to undermine the very mission of the schools: to deliver a high quality education to students. We see this same challenge in health care. As our population gets older and more diverse, and as Coloradans with complex medical needs require increasingly specialized care, the evidence is building that many of the structures and practices of our health care system are not meeting the needs of patients.

We do see some innovation in health care systems change. The Robert Wood Johnson Foundation has a new project called Flip the Clinic, which aims to re-imagine the medical encounter between patient and provider. There are efforts such as Healthy Transitions Colorado, which are working to improve the patient experience when they transition from one care setting to another. Transitions are a very challenging time for patients, and can lead to confusion about medications or next steps that result in physical harm, duplicate testing, or additional costs.

At CCMU we applaud these efforts, and the many more that are underway around the state. However, we also know that the needs of patients—and especially patients with unique needs—are not often driving the dialogue around work being done to improve the health care system. As we go through the next few disruptive years in health care, we pose a challenge to ourselves and to others: engage with and learn from patients and follow the available evidence, even when that’s the tougher path to follow. Some school districts, like Montezuma-Cortez RE-1 in Southwest Colorado and Academy School District 20 in Colorado Springs, are making it work, despite the challenges of implementation. And so can we—we owe it those we aim to serve.

The Evidence for Empathy

In Light of New Evidence