You are here: Home / Learn More / Blog / From the Community to the Capitol 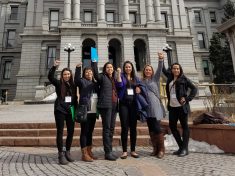 This post was written by Erika Serrano, a former member of our team.

Growing up, I do not remember having conversations with my family or friends about politics. It was almost as if my parents did not want to know or perhaps they thought they did not have a say either way. As I entered adulthood, it mostly only came up during presidential elections, and even then the people around me mostly made comments about not believing in politics or not taking sides. I started to believe that politics were meant to be dealt with by the people who have traditionally held power--that they would ultimately have the final say.

However, when I started working with Center for Health Progress, I had a vision that I could impact immigrant and refugee lives in a way that would improve their overall well-being. I have now had the opportunity to meet new people and listen to their stories of resilience. At Center for Health Progress, we believe people directly-affected by the changes made to the health care system have the power to stand together and share their voices at decision making tables. Oftentimes community voices are missing from these conversations. As I learned how a bill becomes a law, I started seeing how politics was something I could have a role in, and so could my community. Our voices could be included in this process, and we have the ability to lobby or testify to support a bill that would create better overall health outcomes.

As part of my work, I am also able to facilitate group meetings of the Morgan Health Connectors in Fort Morgan who want to grow in their leadership and take action for their own health and their community’s health. In March, I invited them to attend Latinx Advocacy Day at the Capitol and advocate for the immigrant community. Latinx Advocacy Day is a day of connections, learning, and advocating for issues affecting Latinx communities. It is also an opportunity for us to lift our collective voices and meet with legislators to advocate for the needs of our communities. Five leaders from Fort Morgan decided to attend the event, and for some it was their first experience visiting the Capitol.

Emotions of excitement, joy, nervousness, and fear were felt throughout the day by our leaders. We listened to Governor Polis’ opening remarks, then we transitioned to breakout sessions, including the I Drive Expansion Bill, which increases the number of DMV offices where immigrants without documentation can apply for driver’s licenses, and the CARE Act, which would increase access to reproductive health care. After that, over 300 of us marched peacefully to the Capitol for a rally. We heard from Latinx legislators and the actions they were taking during session, then we separated into our district group and met with our Senator--Senator Sonnenberg. The Morgan Health Connectors shared their stories and asked him to support legislation that would directly affect them and their communities. This was a great day for us and I am sure for many who attended. Afterward the ladies felt empowered, listened to, and learned that their stories mattered.

Now when I hear people say they don’t “talk politics or take sides,” I offer them an opportunity to hear how lives can be affected by political decisions and the many ways each of us can take action. Together, we can ensure that legislation creates a pathway towards equal health outcomes for our communities.

Community Is a Ham Bone