You are here: Home / Learn More / Blog / Getting Into the Entrepreneurial Spirit 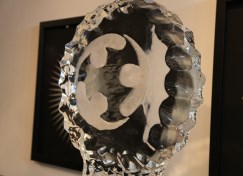 For over 25 years, my dad owned and operated a small business called Colorado Ice Sculptures. He started out sculpting ice, as many of his peers do, as a small part of his first Executive Chef job at a country club in Evergreen. He quickly became a popular artist in the already crowded and storied Colorado ice-sculpting scene, and his talent and creativity won him many competitions over the years. However, what really set him apart was his business savvy. Working as one of his sculptors for 15 years, I witnessed firsthand as he grew the company from a small side project to a successful and thriving family business. He sold the business last year to another of his long-time sculptors, who has built on the foundation my father laid.

As successful a small businessman as my dad was, he was never able to do it full-time. While he built his ice-sculpting business, he still held a full-time job as an Executive Chef, responding to business inquiries during his breaks and off times, carving on the weekends, and managing his carving team with whatever time was left. It wasn’t that his business couldn’t support itself—in fact, there’s no telling how much more it may have grown had he been able to focus all his energy on it. The main reason he never took the plunge was his inability to secure affordable, non-employer based health insurance coverage for him and my mom, who, as an ovarian cancer survivor, has a pre-existing condition that requires quality health insurance.

As numerous studies have suggested over the years, this experience—sometimes called “job lock” or “entrepreneurship lock”—is common across the country. A frequently cited 2011 study by the RAND Corporation (PDF) concluded that the lack of affordable health insurance options for self-employed individuals is a key reason that individuals decide to stay in a job that they are unsatisfied with instead of starting their own business. Additional studies have quantified the situation, suggesting that approximately 1.5 million Americans are not pursuing their entrepreneurial dreams due to fear of losing their employer-based health insurance coverage.

As Colorado has committed to implementing various health care reforms over the past few years, I’ve wondered if it would result in a local entrepreneurial renaissance. Indeed, the Urban Institute estimates that 27,000 more Coloradans will decide to become self-employed as a direct result of health reform implementation in our state.

Similarly, I’ve already heard a number of stories from friends and colleagues who’ve recently started their own small businesses because they’re finally able to secure affordable health insurance coverage as a self-employed individual. Some of these stories include a woman who is realizing a life-long dream to start Colorado’s first audio-only library, a friend who is making waves building an innovative walking and healthy living enterprise, and a prominent Colorado painter who has finally secured health insurance for him and his family.

As we continue to learn and understand how communities and individuals are impacted by health reform in Colorado, I’m confident we’ll continue to see the impacts of increased entrepreneurialism, too. In a state already known for its innovation, creativity, and boundless energy, I can’t wait to see what this entrepreneurial renaissance brings us.

The Spirit of Gratitude

The Evolution of Social Movements