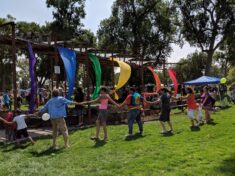 I live in southern Colorado, a full two hours south of Denver, if traffic is light. As housing prices have climbed and folks are squeezed out of the housing market in the Denver metro area, I’ve noticed more folks moving south to enjoy our milder winters (less snow!), our beautiful Chicanx/Latinx/Mexican culture (green chile!), and substantially more affordable housing. In the last five years, I have met many older LGBTQ adults who are retired or of retirement age, living on fixed incomes and are new to the area. I’ve been pleasantly surprised to learn that a whole community of older trans adults call Pueblo home.

I’ve been thinking a lot about these new members of our community. How welcoming is our community to older LGBTQ folks? What are the barriers? In what ways am I upholding oppressive systems and ideologies that dehumanize? Am I equipped to be a good ally? Where can I, as a queer woman of color, use the places where I have less assigned power to inform the ways in which I have more assigned power and privilege? It is my hope that we are building a proud and safe community with the help of activists and organizers like Tom Carrigan and Ryan Yanke.

Around the country, trans people, and especially trans people of color, continue to face violence—both physical and political. In fact, Arkansas’ legislature just overwhelmingly passed a bill to ban gender-affirming health care for trans youth, which will keep them from accessing medical care that is recommended by the American Psychological Association, the Endocrine Society, and other experts. Children who don’t get this critical medical care are at greater risk for depression, anxiety, and suicide—so legislation like this, which is being considered around the country, will cause real harm. Last year saw the highest number of fatally violent incidents against trans people in the US since it’s been tracked: 44. Fighting for health equity means fighting for justice and liberation for all LGBTQ people, at the same time we fight for racial justice, immigration justice, and justice for all those facing violence and oppression.

There are a couple of resources that have emerged in this part of the state to help support transgender folks. The Southern Colorado Equality Alliance (SCEA) is hosting a community survey to understand the LGBTQ community's experiences, perspectives, and concerns with respect to the COVID-19 virus and vaccinations. The results of this survey will be summarized so that feedback can be used to bring attention to critical needs and inspire action. Also, Ryan Yanke, an LGBTQ Community Consultant, has been contracted by Pueblo County Suicide Prevention Coalition to provide some much needed training for those serving LGBTQ individuals, mentors and parents of LGBTQ youth, and community advocates.

I’m committed to being a better ally to the trans community and to do that, I must first acknowledge that I have some significant growing edges. I’ll need to continue to self-examine my own limits and barriers and I’ll need to admit when I don't know something—and there’s lots I don’t know. I encourage you to review these important reminders if you’re interested in joining me in becoming a better ally. And if you are transgender and in need of support and services, the state of Colorado has compiled a comprehensive set of resources. You’ll notice that most of these resources are in the northern part of our state but southern Colorado has a few bright spots! Lastly, it is important to have a community of accountability and remember that being an ally is a sustained and persistent pattern of action; not an inert noun. Together, we can do more and be more!

If you are an LGBTQ individual living in southern Colorado, please complete the SCEA survey! And if you are interested in attending LGBTQ trainings or would like to request a consultation/training, reach out to Ryan Yanke, MS, at ryan.yanke@outlook.com.