You are here: Home / Learn More / Blog / In Defense of Medicaid 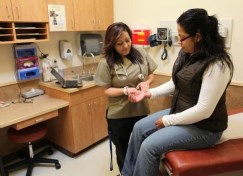 Recently, when I visited the residents who live at a local affordable housing unit, one grandmother shared this sentiment with me: Even though Medicaid has its problems, you’re happy to have it. Because without it, you have nothing. She spoke to a reality of living uninsured that many have experienced, and the data proves it—of the 16 million US adults that gained Medicaid coverage through the Affordable Care Act’s expansions, three out of five were uninsured beforehand. Medicaid is the primary coverage for many who cannot afford private insurance plans, and we know that Medicaid helps people better afford prescription drugs, access primary and preventive care, and avoid the emergency room. Simply, being uninsured is scary (PDF), and having coverage gives peace of mind.

As a result of the 2016 election, Medicaid as we know it today has become vulnerable. The latest we have heard from the national level is the possibility of converting federal funding for Medicaid into block grants (PDF), which has been touted as a way to give more flexibility to states. However, block grants, in short, actually place more restrictions on states and limit funding to a fixed dollar amount. That funding would not grow in response to economic downturns or other unforeseen circumstances. Additionally, that funding would not reflect the health needs of a population that might grow over time, such as long-term care services, durable medical equipment needs, or management of chronic conditions. Ultimately, due to limited funding, Colorado would have to then make difficult choices resulting in increased numbers of people without health coverage.

To create the Medicaid we have today, Colorado has pursued creative solutions to ensure that many more Coloradans have a way to pursue their best health. In partnership with hospitals around the state, health care providers, the governor’s office, and the legislature, we crafted a uniquely Coloradan solution. We now have a program that will allow a young mother to get dental care so her teeth are healthy and she feels confident going on interviews. We have a program where a former nonprofit executive director can access important health care services while she’s in between jobs. We have a program where parents can learn how to manage their daughter’s asthma so she can stay out of the hospital and in school. These are all true stories of Coloradans who would have had no coverage options if not for Medicaid, and it’s why we’re grateful for the program’s existence. For these Coloradans and so many others, we will continue to defend the progress we’ve made.

States that did not make the same decisions that Colorado did in the last few years are now seeing the effects, and thousands have been left behind without options. While no decisions have been made yet at the federal level, we are keeping a close eye on the discussions. Medicaid, like any health insurance plan, does have its problems, but we’ve worked hard as a state to continue to minimize them, and they are far outweighed by the benefits it provides. We are committed to making sure that we maintain what we have worked so hard to build, so we can keep supporting our neighbors’ abilities to keep themselves and their family members healthy.

Climbing to Kids’ Coverage through CHIP

Much Ado About Medicaid Fraud