You are here: Home / Learn More / Blog / Jewish Identity and the Fight for Collective Liberation 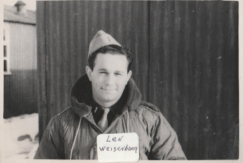 In 2018, a domestic terrorist and white supremacist opened fire and killed innocent members of the Tree of Life Synogogue in Pittsburgh, Pennsylvania. This place of prayer was partially targeted because of their resettlement support programs for immigrants and refugees. This was an act of antisemitism deeply embedded in racism and white nationalism.

The Weisenbergs, my family on my father’s side, were members of Tree of Life before they moved to California in the 1960s. Tree of Life was founded by a group of Jewish immigrants in the 1800s. It was a place of gathering and spirituality for people looking for community in a new country. In the late 1800s, a huge wave of European and Jewish immigrants came to the United States hoping for a new start, free of persecution. All four of my grandparents, Jews from Eastern Europe and Austria-Hungary, were part of this migration. They spoke Yiddish and Hebrew, ate traditional foods, worshiped, lived communal lives, and settled across the Northeast and Midwest.

Acceptance... on a few conditions

To date, I know very little about their day-to-day lives during this time period. It’s a reminder that this country’s immigration policies are rooted in white supremacy. That this nation’s acceptance of immigrants has always been conditional, with rewards to those who gave up their culture to become white. The quote inscribed on the Statue of Liberty reads, “Give me your tired, your poor, your huddled masses yearning to breathe free…” As I reflect on my family’s immigration history and the racist narratives about Latiné and Black immigrants today, it’s clear that this quote has always been aspirational.

As a Jew in America, I’ve always understood the histories that remind me that I am “other.” From domestic terrorism to local bigotry, Jews across the U.S. are still confronting frequent acts of antisemitism. Even recently in Denver and Arvada, antisemitic groups have been committing acts of hatred. However, my whiteness has afforded me, and those before me, the privilege to move through the world without experiencing consistent and direct violence. In this multiracial health equity work, I have begun to examine the ways my ancestors traded in their culture and traditions to reap the systemic social and economic advantages of being white in America.

Before we were white

As part of my professional development at Center for Health Progress, I'm taking a course called “Before We Were White.” I've been learning more about social construction of race in America and my ancestors’ roles in creating this reality. Moving away from a place of guilt as a white Jew and seeing myself in the fight for shared liberation is a lifelong process that requires us to examine the ways we've caused harm to others and also experienced harm ourselves.

At the start of this course, I was reading On Earth We’re Briefly Gorgeous, a beautiful novel written by Ocean Vuong, as a letter to his mother. After reading, I wondered what it would feel like to write something to my ancestors, exploring identity and immigration. Writing has been healing as I process what my ancestors lost in order to assimilate, and the ways in which I hope to break harmful patterns for my own family.

A letter to my ancestors

“When you graced the pews of the Tree of Life, I was just a plum shaped promise. The men around you spit into small town dirt watering the future. So your granddaughter could stamp colors on her arms and they’d still see right through her (nevermind a cemetery of her ancestors). When the men in my life carry the stories, they are only of glory, of riches–and not of pain. Who can tell me those pain-filled stories too?

I imagine they mocked your height, your nose, your dialect. Not quite white yet, freshly stained by diaspora. So to prove yourself worthy of American acceptance, you did what they did best and went to war. Thousands of feet above the human smokestacks you freed others to follow in your footsteps. You steered bombers like Greyhounds through the sky, just so they too could be like you and I.

You, so able and willing to rake up histories of struggle fossilized deep in your subconscious.

You, so good at war that you maxed out on missions.

You, so tirelessly wrestling my future of enemy hands.

A Jew waves the SS soldier his final goodbye. A Jew sells the first German cars to touch hungry Midwestern soil. A Jew gets close enough to hide safely in the skin of the desirable, like TV static.

Years later, a man who is the color you were, became, preached massacre from the bima. Zadie, if I told you what happened that day, would you spill your borscht in shock? The white table cloth draped and dripping beet red. If I told you your once-neighbors died in agony again, would you slip me a crisp fifty dollar bill under the table, our hands meeting to seek cover. If I told you your work was far from over, it will never be over, would you lay your head down and cry?”

Not too late to resist

My grandpa passed away in 2005. His parents were from Austria-Hungary and he was one of eight children. After settling in Ohio, he fought in WWII and then joined the workforce. The forces of capitalism in combination with systemic racism pushed and permitted him to move our family out of a place of struggle, but not without a price. Through this process of distancing, my ties to our culture have been weakened. My solidarity with neighbors has been discouraged. However, it is not too late to resist the forces of white supremacy.

At Center for Health Progress, we seek to address the inequities that have been intentionally created through laws since our nation’s inception. I find inspiration in the value system of Jews who came before me. During the Civil Rights movement, Jews represented a disproportionate number of white people involved in the struggle.  Many of them risked so much to protect their families while still participating in critical moments of racial justice to turn the tide of equality. I invite other American Jews and folks with European ancestry to join me in interrogating our histories, processing our complex identities, and envisioning a different reality.