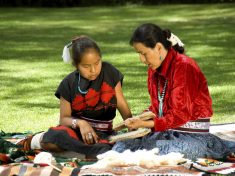 Over the course of this year, I’ve had countless conversations with female friends about the past trauma that has recently resurfaced for them. From national affairs like #MeToo and the Kavanaugh hearings to local issues like the expulsion of Representative Steve Lebsock from the Colorado legislature, there has been a major emphasis on gender, violence against women, and sexual harassment in 2018. It’s scary and emotional and incredibly frustrating that we still need to have these conversations. At the same time, I also recognize that white women and our stories are getting most of the attention. Men, broadly, are the primary perpetrators of violence against women, but women of color are victimized at much higher rates and in much more dangerous ways than white women. Native American women, in particular, have been systemically targeted since before our nation’s birth, and have historically had far fewer resources and pathways to advocate for justice.

The US has a long history of claiming Native American land for our own and murdering entire communities in the pursuit of our white supremacist notions of “Manifest Destiny.” White people pushed tribes further and further into the West and used sexual violence over Native women as a tool of dominance and oppression. Colorado is home to the site of the shameful Sand Creek Massacre of 1864, where 150 Natives, mostly women, children, and elderly, were killed.

These abuses continue today. Native women are 2.5 times more likely to be raped or sexually assaulted compared to the rest of the country. In a survey of Native women in Seattle, 94% reported they had “been raped or coerced at some time in their lives.” Of those who had been victimized, 42% had attempted suicide. Only 20% reported their attack. Only 8% resulted in a conviction. And, in a perfectly horrible demonstration of how intersectionality works, more than half of these women “thought daily, weekly, and monthly about historical loss of land, language, culture, traditional spiritual ways, family ties from relocation, or boarding schools.” The trauma caused by sexual violence is compounded by the pre-existing trauma that these women were already experiencing due to the oppression of their ancestors by white people. Not only do Native women lack access to supportive services to heal from these traumatic circumstances, they also lack access to justice, especially if it’s a non-Native person who commits the crime, which is most often the case.

And it’s not just Native women. White people have abandoned all women of color in their fight for visibility and justice. We must start centering their stories as we fight back against sexism and sexual violence. Historically, its women of color who have forged the path for the rest of us. Anita Hill was the first woman to challenge a Supreme Court nominee over his sexual assault, and she spoke up during this most recent nomination process, too. Tarana Burke started the #MeToo movement long before it became a catchy hashtag, as a way for survivors to stand together. Sarah Deer was instrumental in the re-authorization of the Violence Against Women Act. These and many other women of color are the leaders we need, and recognition of their courage, resiliency, and contributions are long overdue.

As we approach Thanksgiving, a holiday celebrating the colonialism that launched the erasure of entire cultures and resulted in dramatic health inequities for Native Americans, I hope we’ll take some time to reflect on our country’s true history. We have so much damage to repair, for all Native people, but most especially Native women, who have borne the greatest burden. Perhaps take the long weekend to read a new book and learn about their experiences. I’ve just added Whereas, by Layli Long Soldier, and Heart Berries, by Terese Mailhot, to my reading list.