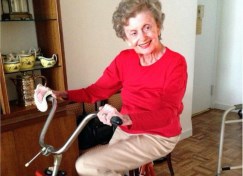 This post was written by Jess Meyer, a former member of our team.

My Grandma Zelda made the best desserts I’ve ever eaten and also instilled in me a love of painting. While many of my memories of her are connected to what made her the loving grandmother she was, her accomplishments in life were far more diverse. One of these was gaining admission to Drexel University’s engineering program at a time when few women attended college, and even fewer studied in what were traditionally considered a man’s field. Even today, women are still underrepresented in science, technology, engineering, and math. Since March is Women’s History Month, I’ve been reflecting on the role of women in health and medicine through the years, as well as thinking about what’s ahead.

It’s been over 165 years since Elizabeth Blackwell became the first female physician in the United States when she graduated in 1849, but the present-day physician workforce is still only 32% female. While around three-quarters of the US health care workforce is women, it is in primarily lower-status and non-leadership positions; in health care, only 4% of CEOs are women.

Despite these disparities in leadership, women have become one of the biggest drivers in the health system due to our strength as a consumer population. Women are more likely to access the health system than men, and we also influence the health system as caretakers and decision makers. Nationally, women represent two-thirds of care providers for family members. And, women make around 80% of health care decisions for their families. We are leading as a group, but not enough of us are leaders.

One advantage of having more women leaders within the health care system would be the perspective they could provide on meeting the health care needs of women. Historically, women have often been left out of the conversation, and had important health needs go unmet. In 1916, Margaret Sanger opened the first clinic in the United States to offer family planning options, but was arrested ten days later, and it was not until 1960 that the FDA approved birth control as a safe and effective option. In the decades following this decision, though, great strides have been made to improve women’s health and access to care. Today, 87% of Colorado women report being in good health, and are also more likely to access preventive services. The passing of the Affordable Care Act has increased access to essential health benefits for women, including well women visits, mammograms, many forms of family planning, maternity and newborn services, and mental health services. Additionally, it barred insurance companies from charging women more for coverage. While some disparities still exist—such as the higher mortality rate from heart attacks for women than men—there has been significant progress.

As for what’s ahead, for me, it’s a career in medicine. I want to be a health care provider, a health care leader, and play a role in improving the health system for us all. In the years to come, I hope we’ll see more men involved in health care decision-making at home, and more women involved in health care decision-making as CEOs, physicians, and industry experts. I want my granddaughters to someday reflect on the milestones of women’s history and see their own potential as leaders. Grandma Zelda may have been an anomaly in her time, but this century holds a lot of promise for us ladies!

Leaders Who Dare to Hope

Leading with Our ‘Why’

Leading Change for a Healthier Colorado