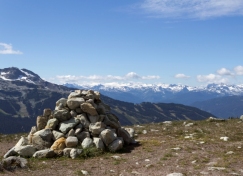 What seems like just yesterday, but was really two and a half months ago, I began my first day of work at CCMU. Though I was extremely excited to be working here, I was a little intimidated at the idea of entering into a group where everyone had many more years of experience. I was hoping that the steep learning curve would not be more than I could handle.

It didn’t take me long to realize that our group thrives on a sort of mutual mentorship—we all have our own mentoring moments to lead the group and share our wisdom. My rookie status was not held against me, or used as an excuse to keep me out of decision making. Our meetings are open, roundtable discussions, and we all give and take simultaneously. It reminded me of the cairns I so closely followed while hiking as a child. I was certain one expert hiker had made the rock piles to help more novice hikers (like me) avoid danger and stay on the right path. However, I soon learned that the building of cairns was communal. All hikers contributed to the guiding structures—expert or novice, young or old.

I’ve started to notice that this mutual mentorship model shows up in other places, too. Last week I participated in the annual meeting of the Colorado Network of Health Alliances. The meeting is an invaluable opportunity to bring our statewide network together in one room, where shared learning can take place in an inclusive, collaborative, face-to-face way.

The room was full of all sorts of groups, some that had been around for many years, and others that were newly sprouted. The Chaffee County Health Alliance is one of the network’s newest members and most recently formed. They were in the same boat I was, and were just getting their feet wet. On the other hand, the Citizens Health Advisory Council is a group that’s nearly a decade old, making it one of the older groups in the Network, with significant experience and wisdom to share. But in this group, seniority does not translate into elite status. Everyone takes turns learning and teaching alongside each other. Rocky Mountain Rural Health, another new addition to the Network, is an old group taking on a new mission, and their contributions to the conversation added more depth and insight, as they simultaneously sought guidance from groups on their newer endeavors.

As the afternoon progressed, I enjoyed watching groups work together, sharing stories of successes and lessons learned. The guidance they provided for each other, and the mutual mentorship I witnessed, fueled my excitement to work with this group in the upcoming year. I know we all have a lot to teach each other, and a lot to learn from one another.

Just as with the cairns, and contributing rocks wherever I am able, I plan to hold myself to the same responsibility in my work at CCMU. Though I may be a rookie for now, I can still contribute as a leader and a mentor. I invite you to do the same in your own work, new and old—we all have a role to play, and every voice is important!