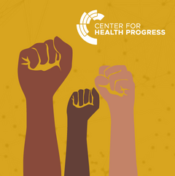 Nonprofit Quarterly recently highlighted Center for Health Progress’ legislative win and our power building strategy, in the second installment in a five-part series, Reclaiming Control: The History and Future of Choice in Our Health.

Dr. Sonia Sarkar of Healing Capital examines how organizers have reclaimed control over health at both the individual and systems levels, disrupting the legacy of a health care system that has imposed control over our bodies.

"Many of us have worked to heal ourselves, whether from an acute illness or the trauma of oppressive systems, and have encountered along the way obstacles that stand in the way of that healing. It’s no surprise that people who recount their negative healthcare experiences are frequently met with understanding and acknowledgement from their audience—within these stories, many express a desire to better control how health is defined, delivered, paid for, and much more.

And yet, while we may share the feeling that something isn’t right, why—even among those who have dedicated their lives and careers to promoting health—is it still unclear how to translate that feeling into action? What would it look like for these collective experiences to connect to a broader power-building strategy that illuminates clear pathways for change?"

Sarkar points to organized community power in Center for Health Progress' work to expand health insurance coverage--a priority that came directly from our base of leaders:

"Colorado-based Center for Health Progress (CHP), a community power-building organization that works across the state to fight for immigrant health and other issues, assembled its diverse, state-wide membership along with coalition partners to secure the passage of a bill, HB22-1289, that will ensure that pregnant, undocumented immigrants and their children are eligible for Medicaid.

The organization engaged grassroots leaders across the state, including first-generation immigrants, native Spanish speakers, and allied health professionals, among others, to craft a legislative point of view rooted in community members’ lived experiences. Joe Sammen, CHP’s Co-Executive Director, highlighted the campaign’s structure, saying “That push for coverage came from the base, from conversations we had with members about what was most impacting their lives.”

Building on their legislative victory, CHP is now further building its base, conducting one-on-one conversations in its key communities in order to build an analysis of power that centers the needs and aspirations of the organization’s members."

Read the full article, as well as part one in the series.

The Profit in Nonprofit