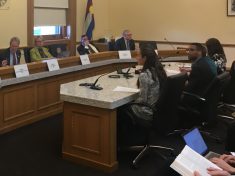 Most of us have that one friend who you love dearly but is TERRIBLE at gift giving. They know you so well—always thoughtful, always kind, but are also (seemingly) hell-bent on giving you things you don’t want, like, or need. For some reason, it never occurs to them to just ask you what you want. So instead of getting a new set of glassware to replace your dixie cups, you are now the proud owner of a limited edition set of Star Wars coasters. Your friend correctly identified a need (you have no coasters) but could have identified the real need if they’d just ask you (you haven’t bothered to get coasters because you have no glasses). Public policy is often made the same way.

To draft legislation, we convene stakeholders, made up of lobbyists, who advocate on behalf of organizations, and organizations that advocate on behalf of impacted communities...but almost never the actual community members that the legislation is intended to serve. Because the process is heavily-biased toward those with resources and connections, we tend to end up with legislation that is well-intended but lacks the insight and understanding of the issues that come from lived experience. Lived experience is important data.

This is not to say advocates and lobbyists don’t have a legitimate role to play in the crafting of legislation. In fact, these professionals help to pave inroads to policy change with data, institutional knowledge, and expertise. However, policies are more likely to foster equitable outcomes when impacted communities are included early and often, throughout the policymaking process, with as much transparency as possible.

I spent this past legislative session training legislators (and their staff) to craft and analyze legislation using a health equity framework. That means asking questions like, does this policy impact social determinants of health? Will the policy have a different impact on communities of color? Were impacted communities involved in the crafting of the policy, and will there be opportunities for those communities to give input throughout the life of the policy? The intent of the Legislative Equity Program is to deepen the field of civic leaders interested and engaged in dismantling health inequities while working on state-level policies. This requires balancing input from policy professionals like me with the input and perspective of impacted communities.

One example of policymaking done well is the I Drive campaign. Immigrant rights advocates heard from community members that the lack of access to driver’s licenses for immigrants without documentation was a real challenge. It was keeping them from getting to work, limiting the kinds of work they could do, and making it hard to get to grocery stores, doctor’s offices, school, and other community institutions. Armed with background information from those impacted and necessary community context, advocates brought together a coalition of people and organizations that had a wide variety of reasons for supporting the issue. Together, with ample input from community members, they drafted meaningful legislation with bipartisan support. Senate Bill 139 was passed by the legislature in May and will be fully implemented by July 2020.

Policymaking shouldn’t be left to the few with the most resources and connections. Our government, our policies, our institutions—they’re supposed to serve all Coloradans, but right now many of them only serve a portion of the population because of the way they were designed. And, they were designed that way because the most important voices were excluded from the decision making process. Community members have lived experiences and insights that are critical to developing good legislation--if we’d just bother to ask them what they want. I hope we build on the success of this year in future legislative sessions, opening up the policymaking process to more Coloradans than ever before.

Policymaking, From Idea to Reality