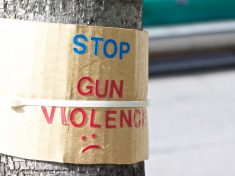 When I heard there was a mass shooting at Maryland’s Capital Gazette Newsroom, I felt like I knew how the next couple days would play out: we’ll find out the shooter was a white male, the NRA will say it’s not the gun’s fault, we will all send our thoughts and prayers, and there will be another shooting next month—or next week—or tomorrow. The names of the victims of mass shootings change, but the pattern stays the same.

Mass shootings have become everyday occurrences in the US. The shooting in Maryland marked the 154th mass shooting of 2018. We’re now at 188. Today is the 205th day of the year, which means we have had nearly as many mass shootings as days in the year. Feel free to re-read that sentence again. Yet, inevitably, with each mass shooting, we wade into political debates no one wins, and then we move on until the next high-profile tragedy.

We’ve long since reached the point where gun violence is a public health crisis. It is the leading cause of premature death in the US—killing more than 38,000 people and causing 85,000 injuries each year. What’s more, this a problem unique to the US. Researchers analyzed 11 countries over 14 years and the United States has had more mass shootings than the other 10 nations combined. And while mass shootings tend to draw more attention, they still only account for a small fraction of the 38,000 gun deaths each year; more than half of all gun deaths are suicides.

Growing frustration around the lack of comprehensive and common sense gun control measures has led many groups to demand action. Last month, the American Medical Association came forth with unprecedented demands from doctor-members to take a stronger stance on gun violence. The #NeverAgain Movement and the March for Our Lives rallies that took place across the country in the wake of the Marjory Stoneman Douglas High School shooting have galvanized activists.

And, as always, there is an important racial component to this conversation. Communities of color continue to be disproportionally affected by gun violence, yet their voices and leadership aren’t fairly represented in the “mainstream” (i.e. white) movements. This is particularly true for black people, who make up 14 percent of the population, but account for more than half of the country’s gun homicide victims. The March for Our Lives rally opened up space for voices of color to speak out—from Naomi Walder, an 11-year-old, who passionately stated, “I represent the African-American women who are victims of gun violence, who are simply statistics instead of vibrant beautiful girls full of potential,” to Aalayah Eastmond, who spoke about how gun violence should not be overlooked in urban communities. But, these moments of creating space for voices of color are rare. More often than not, when communities of color speak out, they are instead criminalized for their moments of courage.

Every life lost is a senseless and avoidable tragedy, but it’s clear from who we mourn, who we blame, and who we praise that we’ve placed different values on different people’s lives. The most basic threshold of health equity would be that no one is more likely to be shot and killed because of their skin color than someone else, and we’re a long way from achieving even that. For the health of our neighbors and communities, this is an issue the health care system has a responsibility to take action on, and we should all be following the lead of those most affected.