You are here: Home / Learn More / Blog / Power to the Patients, Part II 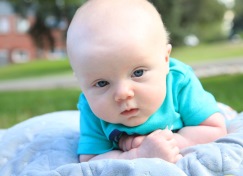 My son was born on June 12, two days before his due date, and at first appeared to be completely healthy. However, four hours later, as we enjoyed family time in the recovery room, we noticed his skin color was turning a worryingly deep shade of burgundy. Twelve days and $125,000 in NICU charges later, he was finally, actually, healthy, and was discharged from the hospital.

I have a strong support network, and a whole lot of people looking out for me, so I was asked many times during our stay in the hospital how I was holding up. Watching my infant son thrash and scream in pain, day after day, as nurses and doctors tried valiantly to place new IV lines—in his feet, his arms, his umbilical cord, his head—well, it was as horrible as it sounds. However, the intense compassion shown by the nurses we spent night after night with, and the endless patience of the physicians answering all our questions and explaining the complex science behind our baby’s condition, made the experience far less stressful and traumatic than it could have been.

Then we had our first pediatrician appointment, and it was as if all the good vibes we had been feeling were sucked right out of the room. The testing they did was done with clearly faulty equipment. The blood draw was botched and had to be redone. The doctor made some care decisions that we vehemently disagreed with, but felt powerless to override. My baby was crying. I was crying. The doctor just stared at us uncomfortably.

Last week, Aditi asked what the health care system could look like if success was measured by doing right by its patients. As I reflect on my two vastly different care experiences, it’s clear which one felt more successful. At the hospital, we, as patients and caregivers, were a valued part of the care team. We were consulted on decisions, given complete information even when that meant taking extra time to teach us, and great efforts were made to make our experience as positive as it could be at a difficult time in our lives. On the other hand, at the pediatrician’s office, we seemed to be an inconvenience. We were not allowed a say in our son’s care, and even our very legitimate concerns about the quality and safety of the procedures they were undertaking were dismissed outright.

These days, there is a lot of emphasis on and conversation around making health care patient-focused. Granted, some of that is simply lip service being paid to an issue that doesn’t always increase profits, but cynicism aside, every part of the health care system—providers, payers, advocates, and most especially patients—agree that the system is better when patients are engaged and their needs are put first. Around Colorado and across the country, things are changing. Data on quality and patient satisfaction is being collected and used to drive change. Patients are being invited to participate in and inform decisions through advisory boards and panels. The paternalistic approach to patient care is slowly being replaced by a patient-friendlier model, with a goal of someday achieving equal partnerships that give patients a voice and a stake in their own health, which leads to better results.

Here at CCMU, there is nothing we care about more than people. Whether we’re advocating for payment reform, seeking health insurance options for immigrants, or working toward health equity, we seek to involve and empower patients. There’s an enormous amount of work to be done to fix our health care system (don’t even get me started on that $125,000 hospital bill!), but if we start with patients—their input, their needs, and their experiences—we can’t go wrong.

Baby William is now three months old with a clean bill of health. And although he doesn’t much care about my opinions on anything (especially when it comes to bedtime), his new pediatrician does, and we feel like valued and empowered patients. And that’s a big victory.

Power to the Patients, Part I