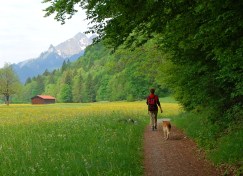 One of my son’s favorite books is called “Henry Hikes to Fitchburg.” It tells the story of how walking was Henry David Thoreau’s preferred method of travel. Instead of taking the train or driving to his excursions in the country, Thoreau would leave early in the morning and walk 25 miles to the country, arriving late into the evening. It sounds simple enough, but I’ve certainly never even thought about walking the approximately 25 miles to Boulder from my house in Northwest Denver to enjoy a stroll on Pearl Street or take a dip in Boulder Creek.

If Jonathan Stalls has his way, however, my tune may soon change. After being transformed on a 10-month, cross-America walk, Jonathan launched an innovative organization dedicated to connecting people to the healing powers of walking. Based in Denver, Walk2Connect urges people from all walks of life to walk out their front door, right past their car, and walk to places and along routes you’d not typically plan to walk. Walk2Connect works with individuals to develop and implement single- and multi-day walking plans and advocates for improved walkability in neighborhoods across Colorado.

I was a bit skeptical when I first sat down with Jonathan and heard his pitch. Don’t get me wrong, I’m an avid non-car commuter, taking the bus and biking whenever possible. But Jonathan’s vision is something much grander than simply not driving your car. He calls it the power of three miles per hour. Jonathan argues that our bodies and brains are not wired to travel at the speeds we’ve come to call normal. Instead, he says, something magical happens when you slow down and take that extra time to walk where you need to go. In his words, “Walking is one of the easiest things we can do to boost how we feel about others, ourselves, and the world around us.” By the end of our conversation, Jonathan’s passion and charisma sold me on the idea. So I decided to try it.

A couple of weeks ago I left my house and instead of jumping on my bike, or in my car, or on the bus, I walked the five miles to CCMU’s offices. I admit, at first I was anxious about the amount of time I was wasting getting to the office. I had work to do! But about halfway through my walk things seemed to slow down. I started noticing the spring flowers, I felt calm and happy, and I forgot entirely that I was “commuting.” What a contrast to the frustrating mess of driving in traffic or missing my bus in the morning. An hour and a half later I arrived at work with a clear head and feeling ready to take on the mountain of work sitting on my desk.

On that walk I also had some time to reflect on the immense challenges we face in creating healthier communities in our country. After about mile three, it became increasingly clear that we’re going to need more innovative minds like Jonathan Stalls to approach health promotion and other issues in new ways. Walking for miles to work or the grocery store isn’t for everyone, but it just might be the inspiration some people need to get on track to a healthier lifestyle.

Small steps make a difference, too. Jonathan urges us all to draw a one-mile circle around our house and commit to not driving in that area. Innovative built environment projects like B-cycle decongest our busy roadways and help people squeeze in a bit of exercise between meetings. Car sharing services like Occasional Car encourage us to drive only when necessary and to walk to complete errands and meet friends. And communities across the state are working hard to build more walkable and bikeable cities (see how your community rates at WalkScore and BikeScore).

Back at home last night I couldn’t help but smile as I read Oliver “Henry Hikes to Fitchburg” for the umpteenth time. Henry David Thoreau was clearly ahead of his times in many ways, but walking long distances wasn’t such a novel idea back then. Today Jonathan Stalls is trying to bring back Thoreau’s time-tested mode of transportation, and he’s convinced me and hundreds of others of the value of a good, long walk. I suggest you give it a try—you might be surprised what you can accomplish at three miles per hour.

Walking Where the Sidewalks End

Power to the Patients, Part II

The Power of Networks

The Power of Thank You