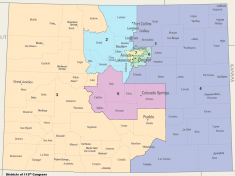 This is a guest post by Harry Budisidharta, Executive Director of Asian Pacific Development Center and a Center for Health Progress board member.

The Census has a tainted history with people of color, especially Japanese-Americans, but it’s an important institution. It’s a big topic, and I wanted to share some thoughts on redistricting, which is something the 2020 Census will have a big impact on.

I’m currently the Executive Director of the Asian Pacific Development Center, where we care and advocate for the health of the entire Asian American, Native Hawaiian, Pacific Islander, immigrant, and refugee communities. I’m also a lawyer, and I like to find ways to use my legal skills to do good in my community. Helping people understand how redistricting works and how it can improve health equity in Colorado is one of the ways I can do that.

Redistricting is the process of redrawing the boundaries of US Congressional districts and state legislative districts to reflect population changes. At the federal level, the result of the Census is used to reallocate the 435 seats in the US House of Representatives, based on that state’s population number. Based on the 2010 Census results, Colorado has seven Congressional seats in the US House of Representatives, but we’re predicted to gain one more after the 2020 Census. At the state level, the Census is used to redraw the boundaries of Colorado’s 35 Senate and 65 House districts.

The US constitution requires that each congressional district have about the same population. This means that Colorado must make a good-faith effort to draw congressional districts with the same number of people in each district. The Colorado Constitution also requires that each state legislative district have about the same population, with only a maximum of 5% deviation between the largest and smallest districts. Furthermore, the districts have to be drawn in such a way to preserve contiguity, compactness, political boundaries, and communities of interest.

When the redistricting process is open, inclusive, and done in good faith, it leads to more equitable political representation (and thus, more equitable public policy) for groups who have historically held the least power in the US—people of color, immigrants, non-English speakers, and other marginalized populations. This is critical for health equity, because our public policies drive access to health care and the opportunity to live a healthy life.

However, “gerrymandering” is practically a political tradition in this process, and the results can be devastating. Gerrymandering is the manipulation of boundaries to create districts that are advantageous to a political party by intentionally drawing the boundaries to exclude people that belong to certain ethnic, racial, religious, or class groups. This concept dates back to 1812 when then-Governor Elbridge Gerry drew a district so contorted that it looked like a salamander. The newspaper came up with the term by combining the governor’s last name with the word salamander.

In addition to gerrymandering, politicians have used “cracking” and “packing” to dilute the power of voters from marginalized groups. The term “cracking” refers to breaking up voters from one demographic group into small pieces across several districts so that they have very little chance of impacting the election. The term “packing” refers to pushing as many together as possible into a few districts and draining their voting power from other districts.

In 2018, Colorado voters overwhelmingly passed Amendments Y and Z to improve the way Colorado draws congressional districts and state legislative districts. Under the new process, we hope to have increased transparency, allow unaffiliated voters a seat at the table, and take partisanship out of the process. This is our opportunity to ensure that those in power make the electoral process fairer, more representative, and more open to everyone. I hope you’ll join me in advocating for it!

The Minority No More

A Multiracial Movement for Health Equity