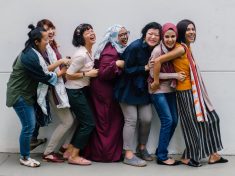 One of the first times I saw someone that looked like me on television was the Yellow Power Ranger, Trini Kwan, portrayed by Thuy Trang. Even rarer, she played a hero. The times I can remember feeling represented in TV and movies since then are far and few between.

There is without a doubt, a problem of representation within the media. The Academy Awards has received significant backlash for the lack of diversity in their nominations. For two years in a row, all 20 actors nominated in the lead and supporting actor categories were white. Just over a quarter of speaking roles went to people of color in 2015’s top movies. And, researchers have indicated the film industry continues to struggle to represent people of color and women (as well as LGBTQ people, people with disabilities, and many other groups). Even when a variety of races and ethnicities are present, representation is often based on cultural stereotypes or in a negative light, such as how black men are systemically portrayed in news and entertainment as violent or impoverished. What we see in media limits and distorts our views of others and affects how people view themselves.

There are many other industries where representation plays an important role. In the classroom, some studies have indicated that if teachers look like their students, then their students may have a better chance of succeeding in school. Outcomes such as test scores, attendance, and suspension rates are all affected by student-teacher demographics. However, Hispanic students comprise around 24 percent of all school-aged children while Hispanic teachers only represent around 9 percent of all young teachers. A diverse teaching workforce is one important way we can start to close the achievement gap.

Health care, too, struggles with representation. Of 16,835 medical school graduates in 2012, only 15 percent were people of color. Diversity in the health professions is an important issue for multiple reasons; the Association of American Medical Colleges says:

“Diversity in the health professions leads to improvements in access to care for the underserved, better quality of care, and learning environments that increase creativity and innovation for all students.”

Representation is an issue in nearly every sector, and there are serious repercussions if it’s not addressed. At Center for Health Progress, we want our community to see themselves in us and feel connected to our work. We’re working to live up to that goal by changing policies, diversifying our board and staff, and building a culture of inclusion and equity. Since 2014, we’ve increased people of color on staff from 17% to 42%, and on our board from 0% to 50%.

As an organization and as a country we still have a long way to go. But, in the meantime, I’m glad to see some small steps towards increased representation in media, with the release of movies like Black Panther and Crazy Rich Asians, which feature non-white casts, rich storytelling, and complex characters. It’s nice to finally feel visible.