You are here: Home / Learn More / Blog / Risking It All for LGBTQ Health Equity 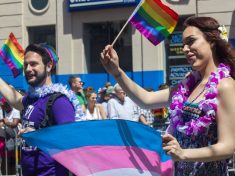 I’ve never been much of a risk taker. I gambled once during a Las Vegas trip, and when I won $0.80 on my $0.20 bet, I decided I should quit while I was ahead. However, some of the people I admire most in the world are those who have had to take huge personal risks to be their authentic selves, fulfill their potential as human beings, and fight for their own health and happiness. So, this Valentine’s Day, I wanted to express my love of and admiration for the LGBTQ community, and specifically transgender and genderqueer Coloradans, and to honor and celebrate their bravery and honesty.

Within the last five years, four of my friends have come out in very public ways—sharing the fears, insecurities, and challenges they’ve faced, as well as their relief and joy at being able to finally live their truth. One is transitioning from female to male, and just celebrated one year on hormone replacement therapy. He’s documented through social media his physical transformation and the health effects he’s endured. Another identifies as a non-binary gender (meaning neither male nor female, but either somewhere in the middle or having some other relationship to gender), and has courageously shared their mental health and domestic violence trauma publicly, in order that others will feel less alone in their own struggle. A third is transitioning from male to female, and her wife of over ten years came out as a lesbian. They’ve received so many questions about their family and the transition process that they’ve started a blog to answer them all. I am humbled by their generosity and proud of their fortitude.

The health implications for these and other LGBTQ individuals are substantial. Daily stressors about stigma and discrimination lead to negative physical and mental health outcomes. Fear of discrimination prevents many LGBTQ people from accessing health care. Suicide rates, homelessness, usage of cigarettes and alcohol, isolation, poverty, lack of social supports, and other major factors in a person’s ability to achieve their best health are more prevalent for gay individuals and especially common for transgender individuals (and if you bring race and ethnicity into it, the disparities are even more stark). There are many reasons for this, many of which involve policies and practices designed to dehumanize and marginalize LGBTQ people. There is no federal law protecting sexual orientation or gender identity as a basis for discrimination in employment or housing, for example. And as of this post, the World Health Organization still considers being transgender a mental illness (although that’s due to change this year). For fifteen years there was a ban on Medicare funding of gender-affirming surgery, which fortunately has now been lifted, but few states cover it through Medicaid (although Colorado does). A 2011 survey of medical schools showed that throughout a standard four-year medical school program, only five hours of education was devoted to LGBTQ-specific issues. And recently, we’ve seen national battles about bathroom policy and military service underscore just how far we have to go in ensuring everyone has the opportunity to live a healthy life.

It would be courageous enough for LGBTQ individuals to ‘just’ come out—as it makes them targets for physical and verbal abuse, discrimination, and rejection—but to share the intimate details of their lives, their relationships, their health, their employment, and so much more is a gift of love and activism. The work of the LGBTQ community (especially transgender women of color) to make themselves visible and reinforce their humanity has required telling their stories more publicly than they might want to, putting their lives and bodies on the line, and enduring cruelty of the worst kind. Nevertheless, they persist. Their resilience as a community and as individuals while in the fight for justice and good health is beautiful and inspirational, and we’re honored to fight alongside them for health equity and a world where it’s not a risk to be ourselves.