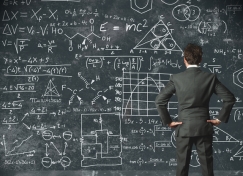 As a little boy, I was fascinated by space. I devoured books about stars, planets, and our universe, and relished my next field trip to the planetarium. In 2006, when the news broke that Pluto was no longer considered a planet I was dumbfounded. As we went from nine planets to eight, I felt like part of my brain had to be rewired. I’ve since come to understand that this type of paradigm shift happens periodically throughout our lives and we have to be ready to adapt.

Around the turn of the century, there was an important paradigm shift in medicine: the adoption of the germ theory of disease. Looking back, the dominant understanding of how diseases were caused and spread before germ theory sounds far-fetched. The medical community believed that diseases spread through contact with the local “miasma”—a noxious form of bad air that could be identified by its horrible smell—and not from individual-to-individual contact.

Once John Snow traced an 1854 cholera outbreak in London to a contaminated water pump, and Louis Pasteur conducted his groundbreaking experiments linking disease to germs in the early 1860s, the miasma theory of disease was retired. Importantly, this shift in thinking took centuries because the predominant theory was so pervasive.

As a graduate student, my professor, Dr. Stephen Bezruchka, introduced me to a new hypothesis gaining ground with the public health community; he explained that social factors like income inequality, institutional racism, educational attainment, housing, social support systems, and food insecurity were more influential on an individual’s health than the quality and availability of their health care. As our understanding around these social determinants of health increased, Dr. Bezruchka argued, the resulting cultural shift that would occur in the medical and public health field would be as monumental as our global adoption of the germ theory of disease.

When I was first introduced to the concept, the literature exploring social determinants of health was robust, but influential publications were yet to be released, such as the 2008 PBS documentary series, Unnatural Causes, the 2009 Robert Wood Johnson Foundation initiative, Commission to Build a Healthier America, and the 2011 World Health Organization report, The Rio Political Declaration on Social Determinants of Health. In much the same way as John Snow and Louis Pasteur’s work catalyzed the cultural shift from the miasma theory of disease to the germ theory of disease, these publications, and many more, have begun to shift the way health care is delivered and health resources are allocated.

Promising new initiatives, like Health Leads and the Colorado Opportunity Project, are creating structures for addressing social determinants of health in clinical and community settings. And shifts in foundation funding priorities, both nationally and locally, are incentivizing health care and community-based organizations to focus on more than access to health care and coverage. CCMU is committed to joining this important work and excited to be part of two innovative approaches tackling social determinants of health—The Colorado Trust’s Health Equity Advocacy strategy and Together Colorado’s BUILD Health Challenge project.

Through this new work, I’m optimistic that we’ll begin to see improved population health outcomes and reduced health disparities. I may still miss our ninth planet, but I’m ready and eager for this new theory of population health to drive our health systems change efforts!

Making the Case for Health Equity

The Evidence for Empathy