You are here: Home / Learn More / Blog / The Courage to Do Nothing 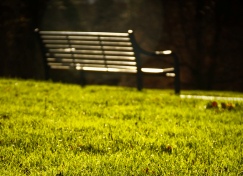 This post was written by Gretchen Hammer, a previous member of our team.

In nearly every health policy conversation we have these days someone says, “We need to shift our current health care system from one focused on volume to one focused on value.”  Implicitly this phrase means we should incent providers to only do things to patients that provide value to their health.  A recent personal experience reminded me that sometimes, the best thing our health care providers can do is nothing at all.

Last Tuesday my grandmother fell and broke her hip.  She had been in declining health for a couple of months, getting weaker and weaker as her body began to show its age of 91.

Grandma Moe, as we called her, was a remarkable woman.  Born and raised in the Upper Peninsula of Michigan and a member of the “greatest generation”—she was tough.  She gave birth to her first child, my mother, while my grandfather was at sea in the South Pacific.  After having two more children, she had a storied career as a beloved kindergarten teacher.  Grandma Moe was well read and would spend hours on Sundays completing the New York Times crossword puzzle.  She lost her sight to rapid onset macular degeneration in 1995, but remained independent and continued her love of books by listening to up to six books on tape a week.  Moe was also a gracious woman.  She was the kind of woman who said things like, “I hope your breakfast was as delicious as mine.”

After she fell, we were lucky that help arrived almost immediately and that she was transported to a hospital with world-renowned orthopedic surgeons.  Once she was stabilized and her pain was controlled, one of these great surgeons came in to visit with my grandmother.  At the end of his assessment he spoke frankly with her and her daughters and recommended against a common surgery to repair her hip.  He gently explained that she would likely never walk again, even with the surgery, and that it may be best to find a place where her pain could be controlled and she could live out the rest of her days in comfort.

It would have been easy for him to suggest surgery for Grandma Moe. After all, there are over 300,000 hip fractures per year, and over 90% of them are treated surgically. On average, each of those surgeries costs $26,000. But he didn’t make that recommendation. His assessment took a while to set in, but my grandmother and her daughters soon agreed.

Grandma Moe was transferred to hospice the next day and passed away peacefully on Saturday morning. These days were precious to us as her children and grandchildren were able to say goodbye to a woman who was resting comfortably, not recovering from major surgery.

It is hard to say goodbye to people we love, but the final days with our grandmother were made easier by one provider’s courage—despite financial incentives to do otherwise—to simply do nothing at all.