You are here: Home / Learn More / Blog / The Healing Powers of Pueblo Chile 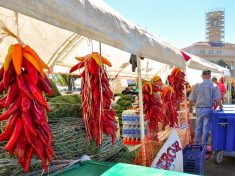 The fall of 2019 will go down in history books as another chapter in the Chile Wars, pitting New Mexico’s Hatch green chile against Colorado’s Pueblo green chile. We witnessed the Twitter battle between governors, there were chile cook-offs that featured US Senate candidates, and Coloradans see ample evidence of New Mexico’s $278,000 ad campaign which includes a commercial and billboards claiming New Mexico as “the Chile Capital of the World.” My family has canned salsa for decades (lovingly called “Saul-sa” after my dad), and roasting chile is a long-standing tradition. Ay, the smoke, the intoxicating, eye-watering smell, the blistered skin of the peppers—it’s all part of the experience. Then, like most of our neighbors, we chop them up for use in everything from sandwiches to stews, and stuff them into Ziploc bags to store in our freezers.

But the role of chile in our communities is as complex as its many flavor profiles. Here in Pueblo, we talk about two Colorados: the “prioritized” Colorado that ends at the El Paso/Pueblo County line and the “neglected” Colorado that encompasses the southern and southeastern parts of the state. Nearly every inequity is amplified here, from our health outcomes to our influence on state policy. The Chile Wars, however, allow us to be seen. Chile fuels our pride, gives us the chance to tell our stories, and elevates our gifts of hospitality. For many of the people who were planted here, who have called southern Colorado home for generations, chile is our identity—Latinx and Italian farmers have grown these peppers for more than a century in these fertile valleys, a high desert region with the perfect combination of altitude and abundant water supply. Pueblo chile has been cross-pollinated to produce the meaty, hot, pungent pepper perfection we have today. The terrain shapes the chiles just as it shapes the people.

Chile is particularly important to the identity of Pueblo’s Chicanx folks. You may have heard that the Arkansas River that runs right through our town was the US-Mexico border until the passage of the Treaty of Guadalupe Hidalgo in 1848. Lesser known (or at least lesser talked about) is what happened with many of our families whom the border crossed. As a matter of survival, they played up the European parts of their ancestry at the expense of the indigenous parts—claimed new identities as Tejanos or Hispanos. No, we don’t speak often about the old anti-immigrant policies of historically Latino entities like LULAC or the GI Forum, and it’s only in whispers that we acknowledge that our heroes, like Cesar Chavez and Dolores Huerta, often rebuked Mexican immigrants as threats to their union organizing. The Chicano Movement of the 1970s included a reckoning of this intra-ethnic aggression, a reckoning that we still struggle to live out. The name Chicanx remains a testament to the fact that assimilation was a poor strategy then and remains a poor strategy now.

Achieving health equity will require healing the past, and chile provides us that opportunity. We must heal the hurts of our own assimilation, the hurts of denying our indigeneity, and the hurts that our own self-hatred has rained down on our immigrant family. It’s over a bowl of green chile, or a plate of freshly roasted chiles and tacos that this healing continues—a source of pride that keeps us tethered to our lands and tethered to one another. That’s where the magic happens and where the work begins. Chile is more important now than ever.

Updates from the Field

The Real History of Pueblo, Colorado