You are here: Home / Learn More / Blog / The Importance of New Narratives 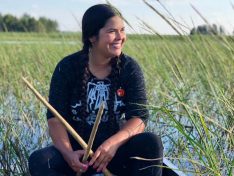 I was 19 years old the first time I saw Rigoberta Menchú Tum speak. She had traveled to Colorado from Guatemala with PeaceJam to speak to youth leaders who were committed to furthering social justice and peace in our communities. She spoke powerfully about her political work in Guatemala and painted a vivid picture of a new kind of world rooted in social justice and liberation where all people belong and thrive. Her story introduced me to new narratives of what’s possible in the world and inspired me to seek out powerful leaders who could impart more and more stories of change to inform my work. These stories weren’t just a formative part of my worldview as an emerging social justice leader, they have helped sustain my energy and optimism as I’ve dedicated my career to it.

Recently, I attended a racial justice facilitation training conducted by the Interaction Institute for Social Change that helped illuminate why these stories were so powerful for me. The training described four types of stories, developed by The Storytelling Project, that can be used to understand and start to undo our current systems of oppression:

Looking back at the countless inspirational social justice leaders I’ve heard speak over the years, their impact was in the powerful resistance and counter stories they articulated, which helped me believe that a new world is possible. Nearly 20 years later, I’m still continually drawn to events with speakers who share these new narratives. It’s why I’m so excited for our HEALTHTalks luncheon every September. This year, Tara Houska (Couchiching First Nation Anishinaabe) will join us on September 17 to impart lessons from her work to protect land and water rights as a tribal attorney, and to share new narratives on power, justice, truth, and the role of the environment in our lives and health.

Tara was most recently the Campaigns Director of Honor the Earth, and a former advisor on Native American affairs to Bernie Sanders. She spent six months on the frontlines fighting the Dakota Access Pipeline, and is now engaged in the movement to defund fossil fuels and a years-long struggle against Enbridge's Line 3 pipeline. She is also a co-founder of Not Your Mascots, a nonprofit committed to eradicating Native stereotyping. It’s a privilege to have her in Colorado, and I can’t wait to learn from and be inspired by her. I hope you’ll join me at the event and help us bring some new narratives to life!