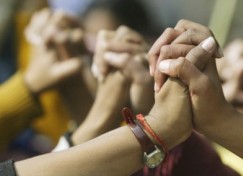 Sitting in pairs in a makeshift classroom of south Denver last week, our especially diverse group of Mental Health First Aid trainees prepared to practice a discussion with someone who was struggling with depression and suicidal thoughts. I was paired with a nurse from Colorado Springs and she and I breezed through the exercise, confident in our newly-acquired skills. However, behind us sat two Nepali interpreters who had already expressed their skepticism about whether anyone from their community would actually have such a conversation.

One of the men, acting as the friend in distress, told the other that he was unhappy and was giving away his DVD collection because he would not need it anymore. The other responded, “Oh, well I’ll take it—thanks!”

It wasn’t that he misunderstood his role in the conversation, or the underlying meaning of the statement of distress, it was simply that this kind of conversation was out of alignment with his cultural norms around mental health. He told the group that if he were to bluntly ask a friend if he or she were considering self-harm, it might result in physical violence against him.

As it turns out, until you’ve seen the way culture can affect health care, it’s hard to truly understand cultural competency. Sure, I understood it abstractly, or in theory, but until I actually encountered it (or the lack thereof), I don’t think I really got it.

His admission sparked a conversation we were all a little unprepared for, but were ultimately so grateful to be a part of. Our class included police officers and graduate students, secretaries and clergy, and our home countries ranged from Bhutan to Mexico. There were a lot of, “In my community…” stories that spoke to a larger need to understand not just the individual, but the culture in which they live, in order to provide appropriate health care. There were also a number of maybe-we-should’s and if-only-we-could’s that brought out ideas around better integration of mental health and physical health, the need for more mental health care and education for young adults, how to reduce stigma, and how to involve the various faith communities in mental health care. A Burmese woman spoke with great insight about translating culture in the way we translate language, explaining how the suggested Mental Health First Aid actions could be modified or substituted with more culturally-appropriate actions based on a specific community. It was the kind of conversation where everyone in the room was both teacher and student, and it was powerful.

When we talk about access to care in Colorado, we most often refer to provider shortages, appointment wait times, distance to facilities, costs, and other such issues. As we become more aware of the role race, ethnicity, and culture play in our ability to live a healthy life, it’s important that we include cultural competency in these conversations. Your health care is ultimately a very personal experience—a human interaction, a sharing of intimate details of your life, an exposure of one’s vulnerabilities—and nothing supports a positive health care experience more than a provider and system that recognize and honor the unique needs of each patient.