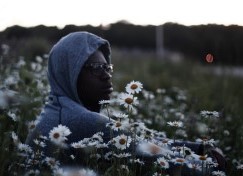 I was out walking my dog recently, when I turned a corner and found a woman sitting on the sidewalk, clutching her leg and crying out in pain. She needed medical attention, but refused when I told her I could call 911. The story came out in fragments. Her friend had been driving. He wrecked the car and the airbags deployed. She was tossed around inside the vehicle. He took off on foot. She didn’t want the cops involved. I told her that I really thought we needed to call for help, and she finally relented.

My first aid certification has long since expired, and I was useless for anything but sitting next to her, reassuring her that it would be okay (but would it really?), and encouraging her to breathe as deeply and calmly as possible. Soon we had a police cruiser, ambulance, and fire truck barreling down the street toward us. I had a sinking feeling I knew which of the three would be taking the lead on this call.

Sure enough, while the paramedics and fire personnel stood out of the way, the police officer peppered her with questions. I learned that the vehicle was stolen, the driver was wanted on four felony charges, and the woman had a crack pipe with her. She also appeared to be in a lot of pain from a very broken ankle (and other probable injuries), but—priorities.

As I read in horror about Charleena Lyles’ death last week—shot and killed by the police she called for help, in front of her children—I can’t help but reflect on the cruelty of our country’s priorities right now. We have arrested undocumented domestic violence victims who sought protection from their abusers, prioritizing immigration enforcement over their health and safety. We have prioritized tax cuts for the wealthy over coverage for millions of Americans. We chose to reduce city spending instead of ensure clean water, which led to a dozen deaths in Flint, Michigan, and many additional health problems for residents. In my own neighborhood, I watched as we prioritized getting a badly-injured substance user into the criminal justice system instead of the health care system.

Science has unequivocally demonstrated that more equality makes societies healthier. And happier. And richer. And pretty much greater in every measurable way. Instead though, we’re actively working to make America less equal—to find both time-tested and inventive new ways to protect and grow the wealth and power of those who already have it and further oppress those who don’t.

The US has a long and well-documented history of oppressive policies and practices that, explicitly or subversively, target people of color, people without citizenship status, people with disabilities, people who identify as LGBTQ, people who practice non-Christian religions, people who don’t speak English, people living in poverty, and others. These are people. Our families, friends, and neighbors. And although our Declaration of Independence asserts that we are all created equal, in practice, we prioritize some people and some lives over others. How do we reconcile these truths with our professed values? What is our individual role in dismantling the unjust institutions and ideologies that perpetuate inequality?

I won’t sugar coat it—we have a lot of work to do, and it likely won’t be finished in my lifetime or yours. We’ll know we’ve gotten there when future Charleenas are offered supportive mental health care and social services that allow her and her family to live long, healthy lives in safe neighborhoods. And that our approach to public health and safety is redesigned to promote equity and community trust, and then adequately funded. We’ll honor the resiliency and strength of our communities of color and other historically-oppressed communities and support their leadership. We’ll see more rehabilitation and less incarceration, and the health of our neighbors—including and most especially those we may find crying on a sidewalk—will come first. Because when our neighbors are healthy, our communities prosper, and Colorado is stronger.

The Coalition for Immigrant Health’s 2021 Priorities