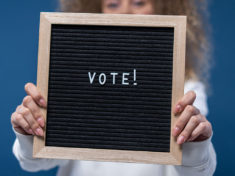 This post was written by Carrie Wilson, a former member of our team.

Growing up, my dad and I had a tradition of going to vote together. Decades later, I can still remember the excitement of it because it made me feel important. I had a say in things, and people had to listen.

My dad would wake me up before school, and we would go to our neighborhood recreation center. After he scribbled his name in two big white binders, we would go to a giant green machine. He would pull a red lever to close the curtain and point to a switch for me to flip. When I flipped the switch, an “X” would appear. Sometimes I flipped a lot of switches; sometimes I only flipped one or two. After he reviewed my work, he would push the lever back, opening the curtains. “We” had just voted.

He treated his right to vote with respect, and instilled that in me. No election was too small. No election is too small, and the most important votes you cast are for the people, policies, and laws that are literally closest to you. They are often less polarizing and are more overlooked by voters, but these choices have the most direct impact on our lives. The mayor, city council, school board, judges, and so many other locally-elected officials make decisions that impact you and your neighbors, such as funding for police and rules about eviction. The municipal bonds and local ordinances that you vote for or against decide your community’s infrastructure, such as schools, roads, and fire departments, as well as which communities are zoned for polluting factories and how we treat our unhoused neighbors. Your vote decides how much tax you’ll pay for a bottle of soda, a tank of gas, or the property you own.

Local elections have fewer voters than state or national elections, which means your vote has more influence. By participating, your voice becomes much louder, more powerful, and a vehicle for change. States also have an enormous amount of power given to them by the federal government, so wielding your right to vote in statewide elections matters, too. State and local laws and policies are testing grounds for federal policy, so by voting locally, you’re also influencing what comes next nationally.

The November ballot will have an important presidential vote for you to make. It will also contain multiple ballot initiatives that can change your life and the lives of your fellow Coloradans. Seven initiatives have made the ballot so far, including a vote on the future of the Gallagher Amendment, whether to repeal the state’s national popular vote law, and an initiative to restrict reproductive health care. There are four more initiatives still under review to see if they’ve gathered enough signatures to make the ballot. This includes the Paid Family and Medical Leave Insurance Program, which has been in the works for over a decade. We’ll be taking positions on some of these soon through a new decision making process led by our grassroots members!

There is no doubt that 2020 is a year we will never forget (please let 2021 be more forgettable!). However, the message that “every vote matters” still rings true in the way it was originally intended—your participation in the democratic process is important. But also, every vote matters because your vote on each and every candidate and initiative matters. So this November, I hope you’ll have your say in things—up and down your ballot.

Ask Me How Your Vote Affects My Life