You are here: Home / Learn More / Blog / What Is Race-Based Caucusing? 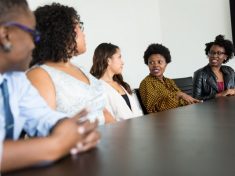 Growing up in a middle-class, suburban neighborhood in Western Colorado, I didn’t have many interactions with people of color. Nearly all my family members, friends, neighbors, classmates, and teachers, were white. The interactions I did have with people of color were primarily impersonal and transactional, occurring in places like the mall, grocery store, or sporting events, despite the fact that people of color comprise more than a fifth of the population of Grand Junction. It wasn’t until much later that I began to develop authentic relationships with people who came from different racial backgrounds. And, until I participated in race-based caucusing expertly facilitated by Transformative Alliances, I didn’t understand how these experiences early in my life informed both my explicit and implicit understanding of race.

Race-based caucusing is a powerful anti-racist tool in which people of color, white people, and “third space” folks (people of color who are perceived as white or those who have alternative experiences with race) primarily work within their own racial or ethnic groups. Although it may initially feel awkward to break into separate groups according to race, there are good reasons to do so. In the white caucus, participants often work to increase their understanding of racism and internalized white privilege and dominance. For people of color, caucusing provides a space to unpack the impact of internalized racism. The “third space” caucus provided a space for folks to examine internalized racism, as well as the significance of being “white-passing.” All the caucuses work on healing and liberation, and there is a system of accountability to ensure the work of the white caucus is in service to the people of color caucus.

As part of Center for Health Progress’s participation in The Colorado Trust’s Health Equity Advocacy Cohort, several of our staff have had the opportunity to participate in race-based caucusing. The experience has been truly transformational, having a profound effect on the way in which I view myself and the world. For example, because my friends, neighbors, and relatives were white growing up, I unconsciously associated messages of safety and belonging with white people. Recognizing that has helped me identify my implicit biases and take conscious action to form new and better associations.  I also learned more about the racist policies and immigration laws that allowed my family to get ahead when they first arrived in the United States. A new evaluation by Social Policy Research Associates of the race-based caucusing we did shows that it had a large impact on other folks who participated as well, with participants reporting “a deeper, more nuanced understanding of race and racism as a result of their caucusing experience.”

These revelations have helped me see our work at Center for Health Progress in a new light. Although our organization has made great strides in working toward racial equity, there’s still so much work to be done. For white people in this work, we must consistently pair our systems change health equity efforts with the personal and interpersonal work of recognizing the advantages our whiteness affords us and taking action to disrupt existing power structures. If we don’t, we will continue to harm and oppress our friends and neighbors of color. The health equity movement needs our full commitment. Ready to get started? Look for an opportunity to join a race-based caucus in your community!

Going Back to School with School-Based Health Centers