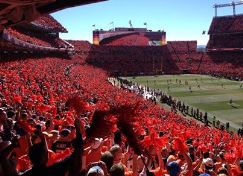 Coloradans have a lot of opinions—on politics, education, the economy, the climate, and much more—and we may disagree with each other on much of it. However, for the next week at least, we are in harmony. We are one. We are United in Orange.

Unity is one of our founding principles as a country. United we stand, divided we fall has been an American motto since the Revolutionary War. When tragedy strikes, we praise neighbors and communities for their resiliency and support of one another—for their ability to come together and work as one to rebuild and endure. When our politicians reach across the aisle to find middle ground and pass legislation in a bipartisan way, we commend them for collaborating and bridging divides. And when the scrappy team of misfits demonstrates the power of teamwork and overcomes all odds to win the game, we’re cheering them on as loudly as we can. There is something about working together to achieve a lofty goal that compels our admiration.

The tricky thing about unity, though, is that it is fleeting when there isn’t an ever-present danger or common enemy. Without the fires or the floods, without the threat of financial collapse, and yes—without the Seahawks—we are prone to the slow unraveling of that community spirit, and we more easily remember all the things we disagree about.

In our world of health systems change, our ever-present dangers and common enemies are often harder to see, and thus, harder to rally around. According to the World Health Organization, 8,700 people die every day from diabetes or its complications. However, those 8,700 are spread around the world to the point of near invisibility. If one community the size of Trinidad, Colorado was wiped out every day, the public response would be swift and substantial. We also know many communities are threatened by environmental hazards and natural disasters, but if it’s not your community, your family, and your home, the threat can feel distant and nebulous. Adding to the challenge of unity around these issues is that identifying dangers and enemies means pointing fingers, and pointing fingers at each other is the quickest path to divisiveness.

The threats to our health and health care are countless, but together we can face them as one; not out of fear, but in hope for a better, healthier future. The battle cries already exist—End the stigma of mental illness! No kid hungry! Smoking kills!—but they need wider adoption and full commitment. You don’t win Super Bowls by hoping; you win through unity and action.

Good Neighbors are Good for Your Health