You are here: Home / Learn More / Blog / Addressing Anti-Blackness in Asian and Other Non-Black Communities of Color 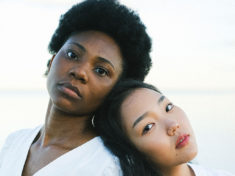 My siblings and I have been talking about the Movement for Black Lives Matter with my parents recently. We realized some of the things that we wanted to communicate were hard due to language and cultural barriers. Although we grew up speaking Vietnamese, and still converse with them in only Vietnamese, some terms and concepts for these difficult and nuanced conversations aren’t in our everyday vocabulary, either because they don’t exist or were never taught to us. We also wanted to be careful to not dismiss their journey and struggle in fleeing to a new country—one with a complex system of racial hierarchies.

As I have had more conversations with family and friends around racial injustice, it’s become clear that there is a lot of work ahead to address the anti-Blackness within all of us. Like all communities of color, Asians have faced and continue to face racism and discrimination, especially during the COVID pandemic, but anti-Blackness runs deeper. Deeper than racism. And so, it’s important for all non-Black communities of color to have conversations around anti-Blackness.

As Vu Le so eloquently explained in his own post on this issue, when our discussions are limited to racism, it can seem like white people hold all the systemic privilege, and all people of color are equally disadvantaged—but that’s not the case. There is a complex spectrum of privilege and oppression, tied up in issues of intersectionality, and inequitably distributed across communities of color.

For a long time, the “model minority” myth has been used to drive a wedge between Asian American and Black communities by perpetuating the idea that all non-white Americans can be academically and financially successful if they just work harder. It blames those who cannot independently overcome insurmountable barriers for falling short of their potential. In fact, there’s a long and complex history between Asian and Black communities, up to and including present tensions and the participation of Asian American officers in police brutality. It’s also important to lift up our history of solidarity and unity:

Our freedom, our justice, and our rights cannot be achieved independently of each other—it is through solidarity that we will prevail. As a start, we must dismantle anti-Blackness within the Asian community, and every non-black community of color. That means unlearning some behaviors and ideas and watching for how it shows up in our lives. It means educating ourselves, listening to Black voices, and showing up in new and enduring ways for Black communities. It means continuing those important conversations with our families, and pushing past any language and cultural barriers. There are many resources available, in many languages, and even conversation templates to help you get started. I’m continuously reflecting on how I perpetuate anti-Black racism and what I can do to dismantle it, and I hope you’ll make time to do the same!

Acknowledging and Addressing Our Complicity