You are here: Home / Learn More / Blog / At the Intersection of Race and Justice 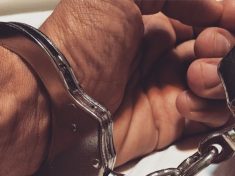 In college, I had a job as a health screener. Big corporations would hire our company to come to their workplace and provide free health assessments to their employees—blood pressure and blood sugar checks, osteoporosis measurements, heart stress tests, and more. Then we were hired by a prison. It was a screening for prison staff—not the individuals imprisoned there—but the van ride to the remote, Arizona desert location was unusually quiet. For most of us, it was going to be our first window into the criminal justice system.

The fluorescent lights in the dingy cafeteria where we set up tinged everything with a sickly, greenish hue. All our supply boxes were thoroughly examined and every needle and other sharp object had to be carefully inventoried so we could make sure we didn’t leave any potential weapons behind. The guards came in—largely white and terrifyingly stoic (although that stoicism gave way to jittery anxiety when the needles came out). We didn’t see a lot of the people serving time while we were there, but those we did see were in stark racial contrast to the guards—majority Latino. I thought about how living behind bars would affect a person’s health. We sent one guard to the ER that day, after finding his blood pressure was so high we feared for his life; how many prisoners may have had critical health issues going untreated?

Race, health, and the criminal justice system have a long (and sordid) history of being tied up together in ways that reveal just how racist our country still is. Decades of the “war on drugs” and being “tough” on crime have led to mass incarceration of people of color. About 15% of all black men in the US have been incarcerated at some point, whereas the incarceration rate of all men in the US is about 6%. Our behavioral health system is also so broken that prisons have become de facto psychiatric hospitals. It’s estimated over half of people held in prison have a mental illness, and three-quarters of those individuals have a co-occurring substance use disorder. When arrests are intentionally concentrated in communities of color and those with reduced access to economic opportunity, it results in wildly disproportionate rates of non-white individuals in need of good health care being locked up instead of treated. Those arrests have devastating impacts on the individuals, who suffer physically and mentally while in prison, and then the punishment continues for the rest of their lives as they have reduced access to housing, employment, and other necessities. And, those unjust arrests also punish the community, causing stress, trauma, social disruption, and a channeling of resources away from its true public health needs.

The mass incarceration of people of color, which has its roots in the structural racism of policing and selectively racialized rule enforcement, has been a substantial driver of health inequities in the US. Behind bars, infectious diseases thrive, chronic conditions are common, and suicide is a leading cause of death. That’s why, when we talk about reducing racial health inequities, we can’t limit our focus to programs like smoking cessation or diabetes prevention—we have to go to the root causes. At Center for Health Progress, we know that when we march with Black Lives Matter activists or protest the separation and incarceration of immigrant children, we’re doing health equity work. We believe our health care system should work for all Coloradans, and it won’t until we reform the racial injustices of our criminal (so-called) justice system.

My trip to prison was voyeuristic. I was an interloper, peering in on an institution of suffering, exploiting the opportunity to fulfill curiosities while firmly protected, figuratively, by my immense privilege, and literally, by the latex gloves on my hands. The gloves must come off. Our white hands must get dirty. The battle for our country’s soul has long since arrived and we are all called to join the fight.

Race is a Social Construct