You are here: Home / Learn More / Blog / Health is Local 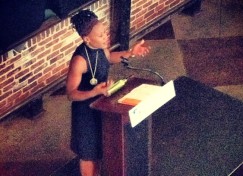 Update: Check out our new project, Health is Local, which grew out of this event!

Before I joined CCMU almost 3 years ago, I spent much of my professional career working on environmental health and justice issues. From pesticide exposure among migrant farm workers to communities facing an undue share of environmental toxins from local ports, I delved deep into the world of environmental regulations, toxicology, and occupational injustices.

It is through this work that I was originally introduced to the vision and grace of Majora Carter. My wife Haley and I remember clearly the night we first watched her now celebrated TED talk. Since that night, the impact of Majora’s work and words on my approach toward community work has been considerable. When CCMU set the focus of our 2013 luncheon, entitled “Health is Local,” I eagerly advocated for inviting Majora to keynote the event. I spent much of the past six months anticipating the event and I’ll admit I was a bit star struck upon meeting her.

At the event, Majora shared her inspiring story of community-led change in the South Bronx. She described her vision of creating communities with diverse economies and creative public spaces which is born from years of experience leveraging community assets for change. And, most aptly, she imparted the following key lessons around maintaining a community approach even in the face of major change and system upheaval:

Here at CCMU, we believe that community-driven solutions are the cornerstone of successful health care system change. Health truly is a local, community-level issue that requires a local, community-level response. With health reform implementation rapidly approaching, our Health is Local Luncheon was a perfect opportunity to take stock in where we stand as a state and gather some much-needed energy and inspiration for the months ahead. With Majora’s key lessons in mind, I’m confident we’ll be ready.

It Takes a Community