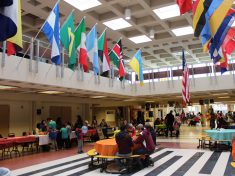 Last year, as part of my participation in the Interdisciplinary Research Leaders program, I had the incredible opportunity to learn from community organizers and grassroots leaders from ISAIAH who are working and living in Willmar, Minnesota. This multi-faith, multi-racial group of community members told their powerful story of how they came together to fight ugly hate speech from elected public officials and ultimately won a more robust local human rights commission in their small, rural town of 22,000 people.

Their story piqued my interest because the community of Willmar has a striking resemblance to Fort Morgan, Colorado, where Center for Health Progress has been organizing for over two years. Both rural communities were historically predominately white and have recently attracted large numbers of immigrants from Mexico and Central America, as well as refugees from East Africa. Some white residents welcome these newcomers with open arms and see clearly how they bring richness of culture to their community and how they are a vital part of the local economy. However, the newfound diversity has also bristled some white residents who see immigrants as a threat to their way of life. In both communities, this tension has led to increases in hate crimes, institutions responding with resistance when needs are not being met, and increased attacks on immigrants.

ISAIAH’s organizing efforts in Willmar have been so successful that local and national news media continuously highlight the results of their work. Most prominently, Thomas Friedman of the New York Times made the case that the town of Willmar is a model example of how to promote diversity and inclusion that the rest of the country should emulate. Mr. Friedman captures some important elements of Willmar’s integration success story, but his piece lacks an understanding of how ISAIAH’s organizers and leaders methodically built community power among the immigrant community. This community power not only worked to put pressure on both formal and informal leaders in Willmar to strike a more inclusive chord, it also changed the entire narrative of the community from one of “make America great again” to the one touted as a success story in national publications.

I was so compelled by ISAIAH’s ability to build and leverage community power, I sat down with ISAIAH’s lead organizer for the region, Alexa Horwart, to glean lessons on how we can further our work in Fort Morgan. Alexa shared that their work is fundamentally about supporting individuals in developing a clear story around their personal values and providing opportunities for them to act out these values in the public arena. One of the most effective tools organizers have been using is house meetings, where community members create a deep, vulnerable space to share personal stories of trauma and healing. These individual stories are woven into a collective, public story of resistance and resilience. From this, many informal leaders arise, as do the conditions necessary to promote positive change.

Through our Morgan Health Connector program and our Nuestra Comunidad, Nuestra Salud campaign, we’re working hard to create the same grassroots infrastructure and conditions for change that exist in Willmar. To support this work, we’re exploring what a deeper relationship with ISAIAH in the coming months and years could look like. As a next step, we hope to create opportunities for relationship building and learning, both virtually and in-person, between ISAIAH’s grassroots leaders and organizers in Willmar and our leaders in Fort Morgan.

Grassroots leaders have the answers to many of our country’s
biggest questions about inclusiveness and belonging in a diversifying nation. We need more examples like Willmar where the leadership of immigrants is put front and center—stay tuned to see what we learn!

The Power of Membership

Updates from the Field