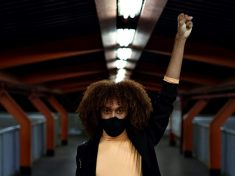 I remember driving home from work on November 11, 2016 and needing to stop to get gas. This should have been a fairly routine stop, but I had just read about a group of white men harassing a Black woman at a gas station. They had felt empowered by the rhetoric coming from the President-Elect and had chosen to act on it. I remember the fear, looking over my shoulder, as I waited for someone to shout at me for daring to be a Black woman in a public space.

In 2009, my boss told me we were in a post-racial world now that Obama was the president. I knew then, just as I knew in 2016, and what so many white people are realizing now, that the racism that has run beneath the surface of our country is as alive today as it ever was.

Over the past several months, I set out to figure out a way to move past the mounting tensions and divide in our country. Maybe that is just what I was raised to believe I should do, what many young Black girls are taught to do: bury the pain, fear, and sadness deep down and put on a brave face because there is work to do. Even for this post, I set out to write about how I intend to bridge the deep divides, to forgive and unite and do my part to connect across differences so we can move on as a country. But the truth is, I have not moved on. How do I, as a Black woman, see the humanity in those who so often fail to see my own?

My humanity has always been under attack. “All men are created equal” was never intended to include me, and that’s clear in everything from the wage gap for Black women, to the disparities in maternal mortality rates, to Breonna Taylor and the countless other black women murdered at the hands of police. This is not a failure of our systems and institutions: it is a feature of them. They are working exactly as they were designed. Watching the results from the election roll in reminded me that many white people are okay supporting the status quo, even as it harms people of color, as long as it continues to benefit them.

And that’s why I can’t just move on.

The people who deny my humanity do so because US laws, policies, systems, and institutions have always encouraged it. We have been split into factions, kept segregated from each other, and told there are differences between us, so that we fight each other instead of those who would keep us all down. And if we can’t admit we have a problem, we’ll never be able to change it. There is no moving on, just continuing the same vicious cycles we’ve always been forced into.

So, instead of moving on, I’m rising above. The cycles won’t break themselves, but when we come together as a movement, we are powerful enough to shatter them. I’m learning to wield my voice as a tool of justice. I’m learning my own value and refusing to let anyone undercut it. I’m learning how to stand in my own power, backed by the power and strength of my community, and fight for our collective liberation. And I’m learning to believe we can rise above this together.

You may write me down in history
With your bitter, twisted lies,
You may trod me in the very dirt
But still, like dust, I'll rise.

Electric Power to the People

The Rise of Collaboration