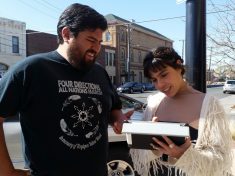 This post was written by Vicente Martinez Ortega, a former member of our team.

I have been lucky to have some sort of medical coverage for the majority of my life—from private insurance to Medicaid and even a period where I made and traded pottery for doctor’s visits. During the time I was using Medicaid, I was college educated, working as a waiter, and on food stamps. I was eventually able to move to a career that I’m passionate about, but without this safety net, I would not be standing where I am now.

Thanks to the expansion of Medicaid, more than 400,000 Coloradans gained health coverage, and now the state has about 1.3 million people enrolled in the program. Here in Pueblo, more than 40 percent of people are on Medicaid. But, we know that our health care system doesn’t work for everyone the same way. So, earlier this year we gathered feedback from 144 of our neighbors in Pueblo through a community survey. We wanted to hear directly from them what the most pressing issues in health care are. This was especially important given that such a large population of our community relies on Medicaid.

In general, Puebloans reported good health and well-being. However, access to health care providers ranked among the top three pressing health issues. Folks who took our survey told us there was a lack of specialists available in the Pueblo area for heart-related issues, transgender care, and mental health services. More than half of the survey respondents stated that the current health care system isn’t meeting their needs. Health care services and health insurance still aren’t affordable and providers are hard to find.

There are many ways the health care system could be doing more for Puebloans. One of these would be to think about health more broadly and change what we consider health care. We know many people in Pueblo live in a food desert and don’t have easy access to transportation, and that makes them unhealthy. We also know there are programs that deliver fresh food to homes, which could address issues of transportation and food. If health system leaders reallocated funding to deliver food to patients, or address housing or other needs, those patients will be healthier and less likely to end up in the hospital needing costly health care services. Another way would be to change how Medicaid works, so that our hospitals can afford to provide the services we need. St. Mary Corwin, who cares for a large number of Medicaid patients in Pueblo, downsized their staff by 300 people because they weren’t making enough money to survive. These are complicated issues with a lot of federal and state policies in the way of change, but our health care system belongs to and should be accountable to us—which means it should work better.

Through the survey, we also learned many people believe it’s important to have their voices represented when changes are made in the health care system, but only about a third feel empowered to make changes. That’s why at Center for Health Progress, we’re working to ensure all voices are heard and considered in its design. We’re forming a team of community members in Pueblo to give input that will transform Medicaid. The input will allow Puebloans to have better access to health care, a more efficient Medicaid system, and spend less on health care services.

I am grateful I had access to Medicaid when I needed it. But, we know that just because a person has insurance doesn’t mean they are receiving the care they need to live a healthy life. Let’s continue to listen to and empower our fellow Coloradans to make the changes they want to see in the health care system. Who better understands the health challenges Coloradans face than those who face them every day? If you’re interested in joining your local Medicaid Transformation Team, please email me today!

Who Does the Health Care System Work for?

The Real History of Pueblo, Colorado