You are here: Home / Learn More / Blog / Mapping Our Way to a Healthier Future 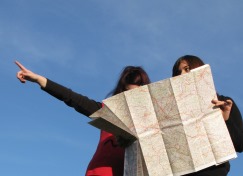 This post was written by Gretchen Hammer, a previous member of our team.

As a child, I remember looking over maps on hiking trips and grappling with how to identify my location and the route of our journey. Over time, I learned how to identify steep pitches, water sources, and geographical landmarks. The skill I never quite mastered was folding the map back up correctly—but who needs a nicely-folded map anyway?

Maps are for much more than navigation, though, and they’ve been prominent in the health world for centuries. John Snow, a physician in 19th century England, is credited as one of the first well-known ‘health geographers’. During a cholera outbreak in London, Snow mapped the epidemic. He was able to identify a source of infection and stop the outbreak before it wiped out the city. In the early 20th century, dentists Dr. Frederick McKay and Dr. Greene Vardiman Black used maps right here in Colorado to identify where children with low cavity rates were living. Dr. McKay and Dr. Black were able to connect the low cavity rates with proximity to water sources with high fluoride content, and discovered the dental benefits of fluoride.

Now, in the early 21st century, mapping of health data has gotten even more sophisticated. Just before the holidays, the New York Times published a map that caught my attention for the better part of an afternoon. It illustrates the distribution of uninsured Americans across the United States based on newly-released Census data.

The percentage of the population that is uninsured varies wildly around the country and even within small communities, and this map brings it to life. It seems to produce more questions than answers. Why does Saguache County have the highest uninsured rate, at 31%? Montezuma County has a somewhat average rate for Colorado, with 21% of its population uninsured, yet the southwestern corner of that county is nearly double, at 40%. What would that area of the county need to catch up? How is it that 47% of the residents of one census tract in Denver are uninsured compared to less than 2% of those living in the neighboring census tract?

Poring over this map, I am reminded how important it is to utilize data to drive our decisions. We can prioritize outreach and access efforts to areas of high need. It gives us a tangible issue to convene around and a place to start our conversations. We are more likely to succeed in our efforts when our action grows from a strong understanding of the current situation.

The Children’s Corridor here in Denver is an exemplary example of data-informed action. This Piton Foundation project focuses on changing the ‘lives and prospects’ of more than 54,000 children who live along the 1-70 corridor, over half of who live in low income families or are considered to be vulnerable. The group has mapped everything from early childhood services to tree canopy coverage within their target geography to encourage partner engagement, understand root causes, and develop creative solutions.

It’s great to see maps being embraced as an important tool in our collective work to improve the health care system. When the work to be done is as complex as health care systems change can be, seeing the data laid out in map form can help focus our attention on the patterns and identify the communities in need. Just as we use them for navigation from point A to point B, maps can help us make our way from here and now to a healthier future.

Inside the Petri Dish