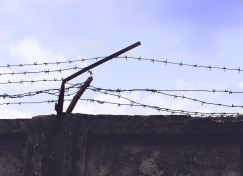 When my sister had a mental breakdown, she found herself face-to-face with two police officers. They called an ambulance and she was escorted to the hospital where she was placed on a 72-hour hold. Once at the hospital, she was told to change into an orange hospital gown, and if she wanted to call home she’d have to use the payphone and supply her own quarter. She found someone to lend her some coins to call our mom, so she could tell her where she was locked up. My sister didn’t think she had done anything wrong, but the system’s response certainly felt like a punishment.

Since 1985, when the era of mass incarceration started in Colorado, the prison population has grown at an unprecedented rate and the state prison budget has exploded by almost 1288%. The closing of many mental health facilities, coupled with the war on drugs, created a pathway to prison that disproportionately impacts people of color and people who suffer from a mental health and/or substance use disorder. In Colorado, 80% of justice involved people have an addiction disorder and 25% have a serious mental illness.

For too long, the burden of managing behavioral health has fallen on law enforcement, the criminal justice system, and our jails and prisons. In fact, Denver County Jail is the largest mental health provider in the state. Every year, tens of thousands of people in Colorado go without proper mental health treatment—and for many inmates, jail is the first place they will get treatment. Colorado has only 15 psychiatrists per 100,000 people (estimated wait times in Denver are about five months, and that’s if you can find a psychiatrist who is taking new patients), ranks sixth in the nation for suicide rate, and is below average in per-capita state and federal spending on mental health.

Across the country, communities have been working to bridge the gap in behavioral health treatment. In San Antonio, local leaders, government officials, law enforcement, judges, medical institutions, and the county mental health authority have started working together in order to better treat people with mental illness. This coalition has built a crisis center for psychiatric and substance use emergencies, in addition to a 22-acre campus for the homeless. They have successfully diverted 100,000 people from jail and emergency room treatment—amounting to nearly $100 million in savings. They have even worked to ensure that once a patient has been released from the hospital they have immediate access to therapy and medication.

Here in Colorado, innovative projects like Mental Health Center of Denver’s Dahlia Campus are bringing mental health care into communities with historic shortages and great need, in order to keep Coloradans out of the criminal justice system. On a four-acre site in North Park Hill, there is now an urban garden and aquaponics farm, a preschool, and outdoor space for recreation—all housed within a mental health care center. The project was developed with the input of residents and will fill an important gap in community services.