You are here: Home / Learn More / Blog / The Racism of US Immigration Policy 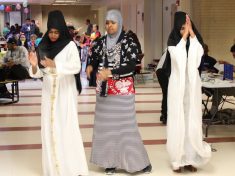 Most of us in this country have a deep connection to an immigration story—our own. My ancestors are recent immigrants on my dad's side, but I'm 10th generation US American on my mom's side. The further back our immigration story starts, the easier it becomes for us to forget this, but that unique story strongly defines who we are today. However, a close examination of our personal history, put into the broader context of our collective history, quickly reveals that all immigration stories were not created equal.

While immigrants of all statuses, ethnicities, and backgrounds are seemingly under attack these days, it’s also clear that some immigrants are being attacked more than others. From Latino parents unfathomably being separated from their children, to migrants from a handful of predominately Muslim countries being banned from the United States, to skyrocketing rates of deportations of migrants from African countries. The common thread among these headlines highlights what history has continued to show us—that people of color are the targets of unjust policies and practices.

Historically, white immigrants have been provided certain rights and privileges, like citizenship status or the ability to own land. Immigrants of color, on the other hand, have faced blatant persecution, including more prominent examples, like the internment of over 100,000 Japanese Americans during World War II, and less well-known examples, like the kids of Latino migrant farm workers being sent to separate “agricultural- and vocational-based schools” right here in Colorado. Today, many people and news outlets use the offensive slur “illegal” to describe immigrants without documentation, which is problematic in a number of ways. And, President Trump has repeatedly lashed out against immigrants of color, calling Mexican immigrants “animals” and African countries “shitholes.”

Importantly, these pervasive narratives perpetuate untrue myths about the people of color on the receiving end of these attacks. Myths, such as the one that says immigrants commit more crimes than non-immigrants, are both factually wrong and morally repugnant. In fact, immigrants not only commit less crimes, unauthorized immigration is likely a main driver behind the lowering violent crime rates over the past few decades. These narratives are being used by powerful people and systems to influence the development and enforcement of our immigration policies and rationalize their explicit racism.

Immigration status directly influences health outcomes and public health, by limiting access to care, transportation, and other basic human needs. All of this ends up placing a disproportionate, and cumulative, toll on communities of color and contributes to persistent health inequities. Until we clearly root out the inherent racism that is the foundation of our immigration policies, we will unlikely create an immigration system that is fair, just, and that creates a viable pathway for more immigrants to call the US home—something a vast majority of us, regardless of our political views, say we want.

Right now, the majority of people putting their lives and bodies on the line to protest and work against these injustices are the people whose lives are at stake—not those of us with the privilege to watch from the sidelines. It’s the Congolese woman who scaled the Statue of Liberty to call for an end to ICE. It’s the people of color who show up for Families Belong Together marches at much higher rates than their white allies. It’s time for the health care system and other systems of power to get involved and show up for their communities, too. Our fight for health equity depends on it.