You are here: Home / Learn More / Blog / To Rewrite Our Social Contract, We Must First Address Racism 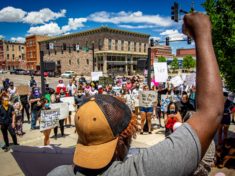 Over the past nine months, I’ve met with dozens of community members, nonprofit leaders, and business owners to wrestle with how we might rebuild our communities in the wake of the deadly COVID-19 pandemic, the expansive economic crises, and the deepening toll of systemic racism. We talked about how these intertwined crises are all connected to our country’s broken social contract. We also talked about how this moment in our country offers a unique opening to push forward bold policies that could start to fix this broken contract. I asked them each: “How would you fundamentally rewrite our social contract in this country?”

A social contract is “an actual or hypothetical agreement among the members of an organized society that defines and limits the rights and duties of each” member of that society. It’s the idea that people willingly give up total freedom in exchange for the benefits of living in a civilized society. But when we don’t provide those benefits to everyone, the contract is broken. Everyone I talked to could generally agree that our social contract should include economic security, safety, a clean environment, access to health care, a safe home, access to quality education, and other basic necessities. As data point after data point tells us, though, these basic things that should be rights in our country are only afforded to a privileged few. And we know that who gets access to these basic things is usually determined by a person’s race, gender, wealth, immigration status, and other identities, with wealthy white men consistently ending up on top of our social hierarchy.

In the face of these overlapping social crises, now seems like the right time to pass a big, bold package of laws that fundamentally rewrites and expands our social contract. The public groundswell of support for racial equity that has arisen over the past year gave me hope that this potential package of laws might prioritize communities of color who were not only explicitly left out of previous bold legislative packages, like the New Deal, but who have seen Federal policies negatively and violently target them since our country’s founding.

But that’s not happening. Why not? A growing body of analysis shows that long-standing, racist narratives, created and promulgated by our country’s powerful people and institutions, have created a deep-seated belief among white people: if our country’s social contract is expanded to people of color, white people will have to give up the rights and securities they currently enjoy. This pervasive, patently false, zero-sum narrative has led to decades of poor public policy decisions that have kept people of color from entering into a broader, more just social contract while also harming the same white people whose racist fears drive those policy decisions.

Heather McGhee is leading this national discussion on racist narratives, and discusses it extensively in her new book, The Sum of Us, with the classic example of how white communities chose to close their community pools rather than integrate them to allow Black families to use them, too. We see this in plenty of other policy decisions—not expanding Medicaid in a state harms communities of color most, but it harms a lot of white families, too. Not supporting COVID relief or raising minimum wage harms communities of color the most, but it harms a lot of white people, too. Overall, these policies have created anemic public infrastructure and intractable economic inequality, which negatively affects all of us.

There is a better way forward, but it will take hard work at the personal level. McGhee argues that before we can “have nice things” like universal health care and a broad social safety net, we must deeply reckon with our country’s legacy of racism. We need truth, reconciliation, and reparations that are widely sponsored by the Federal government and implemented at an intimate community- and family-level. Until white people see that the zero-sum narrative we’ve bought into also harms us, we have little hope for a social contract that promotes widespread security and prosperity for everyone.

Look Upstream to Address the Social Determinants of Health

The Evolution of Social Movements