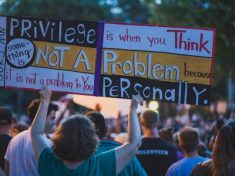 I am a fourth-generation Italian-American; my family immigrated to New Orleans from Sicily when one of my ancestors was recruited to work on a plantation. With his savings, he eventually was able to buy his own farm. Although he and his family faced hardships and discrimination, they still built their own businesses and achieved financial success. That’s a very different immigration story than many other American families, whose ancestors were forced to come to the United States to work on plantations, for no pay, as human property—and it is a story of my white privilege.

“White privilege” is a complicated notion that often makes white people feel anxious or defensive. Until recently, I was one of those people. But, my family’s story and countless other examples helped me understand the innate advantages of being white in the US. Sometimes described as an “invisible knapsack” of unearned advantages, white privilege is everything from getting to learn about your race’s achievements in history class and seeing people that look like you on TV in lead roles, to being presumed innocent until proven guilty or not having violent stereotypes associated with your race. These advantages include being able to access opportunities that help us live a healthy life. Center for Health Progress recently released a white privilege data brief that illustrates how white people largely control health and health care in Colorado (and the US), which puts people of color at a significant disadvantage. These serious disparities exist because of policies and institutions that were designed and built a long time ago.

As we explore in our data brief and our graphic novel, the US has a long and well-documented history of creating policies that have systematically benefited white people over other groups. One example is the 1934 American Housing Act, which led to redlining—or the practice of denying financial loans and services to people of color. Additionally, due to unconscious bias and institutionalized training practices, schools are disproportionately disciplining children of color more often and more harshly than white children. These policies and practices have long-term negative effects on people of color: they have less access to assets and wealth, and children of color are not achieving or graduating at the same rates as white children. These are just a couple examples of the nearly countless ways whites are privileged in our country, and all these factors have lasting impacts across generations.

Having white privilege isn’t a conscious choice, but not doing something about it is. At Center for Health Progress, we are working to educate ourselves and our partners on these factors—the ideologies and institutional inequities that continue to plague our country. We are working to address them using our resources and privileges, and also want to make space for communities of color to lead the way and make the changes to the system that they need to see most.

Going back to my family history, I know that Italians were not considered “white” when they first arrived in the US, and they certainly experienced discrimination. However, the discrimination they experienced pales in comparison to the discrimination and the tortured history that blacks, native populations, and others in America have faced. I can’t change the fact that my family had unequal opportunities, but I will recognize the truth of their circumstances and how our systems were built, and I will work to improve them for future generations.