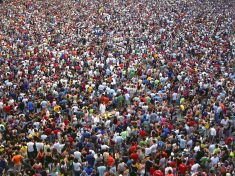 It comes around once in a decade and it’s nearly here again—the US Census. Every 10 years, the government counts the total number of people living in this country, as mandated by the Constitution. In 2000, my friend’s grandpa worked for the Census and he told us about going door-to-door to count and interview people living in remote Upstate New York communities. Fast forward to the spring of 2010. I had just moved back to Colorado and was staying with some friends at their apartment until I got a job and found my own place. The US Census form arrived in the mail on one of my first days there. My temporary roommates filled it out and I asked them to add me as the fourth member of their household. I wanted to be counted, even if I didn’t have a permanent address at the time. And now the Census is almost here again.

The results of the Census have implications that are far reaching. They determine power via representation in Congress and are used for redistricting. They also influence the distribution of more than $600 billion dollars of federal funds. This includes funding for programs like Medicaid, Supplemental Nutrition Assistance Programs, Medicare, Head Start, and dozens more, which play an essential role in supporting families and communities to be healthy. Public agencies and nonprofit organizations also rely heavily on this rich data to understand where people are living so they know where to locate public health programs and services. In 2015, Colorado received $1,481 per person in federal assistance, based on the results of the 2010 Census; we would have received more or less if we had counted more or fewer people living here.

So, counting people matters for health and for health equity. However, by the government’s own admission, not everyone gets counted. The 2010 Census overcounted white people and undercounted many communities of color. People who do not speak English, households with low-incomes, and the LGBTQ community are all less likely to be counted. Even knowing this, there was an attempt to get a citizenship question added to the 2020 Census for the first time since 1950. When testing out this question, the Census found that it would lead to a lower response rate for households that may include immigrants without documentation, but the administration still wanted to include it. Fortunately, they were recently blocked by a judge from doing so.

The current administration has stoked anti-immigrant sentiment through its words and actions, leading many to fear that the Census would be used to find and deport people without documentation. Legally, the information cannot be used for that purpose, but it has been done before in this country. Data gleaned from the 1940 Census was used to identify, locate, and intern Japanese Americans during World War II. And more recently, when immigrants without documentation came forward to sponsor unaccompanied minors seeking asylum in the US, their immigration status was used to deport them.

As a white, English-speaking, US citizen, I am not fearful that the government will use information about me, against me. But, that is not the reality for communities most impacted by historic and systemic injustice in this country. Immigrants and people of color have been and continue to be harmed by racist government policies and practices. It’s no wonder many are wary of the Census. As we get closer to 2020, we must continue to think about both the importance of the Census to the funding and services that support the health of Coloradans and the real fears that lead to an undercount. When the government and decision makers are both held accountable for harm caused by their actions and policies and recognize everyone’s full humanity, we will move closer to a reality in which everyone gets counted.

Health and the American Dream